Isn't there a perfect analogy between ligand-gated and voltage-gated ion channels considered (mathematically) as (non-linear) operators, mapping one function (of time) to another one? Voltage-gated channels respond to voltage signals (= functions of time at a given location, not just a voltage), ligand-gated channels respond to neurotransmitter signals (not just neurotransmitters). Both yield a conductance profile (as a function of time, not just a conductance).

Both ligand- and voltage-gated ion channels display some form of hysteresis, i.e. the dependence of the state of a system on its history. Hysteresis can not be modelled by simple mathematical functions (by which dependencies normally are modelled), but maybe better by some non-linear operators.

With respect to the Hodgkin-Huxley model (that AliceD mentions in her answer): In this model (that is also used by Rall) the resistances (= ion channels) are just switched on and off instantaneously. But this may be oversimplified: it takes some time, and it cannot be done with arbitrary frequency. That's why we possibly need operators to describe them.

My question is: Are there references where ligand-gated channels are modelled mathematically as (non-linear) operators?

Background
Ligand-gated and voltage-operated ion channels do not really perform a memory task. Instead, they channel ions across the cell memnrane and by doing so they can convey information from out the cell (neurotransmitter release / voltage changes) into the cell. Their role is physiological and the way they are modeled is typically based on Hodgkin & Huxley kinetics (Sig, 2014) (Fig. 1).

The Hodgkin-Huxley model models the semi-permeable cell membrane as a capacitor that separates the interior of the cell from the extracellular fluid. If an input current is injected into the cell, it may add further charge on the capacitor, or leak through the channels in the cell membrane. Each channel type is modeled by a resistor (conductor of current). The unspecific channel has a leak resistance R, the sodium channel a resistance RNa and the potassium channel a resistance RK. The diagonal arrow across the diagram of the resistor indicates that the value of the resistance is not fixed, but changes depending on whether the ion channel is open or closed. Because of active ion transport through the cell membrane, the ion concentration inside the cell is different from that in the extracellular liquid. The Nernst potential generated by the difference in ion concentration is represented by a battery. The Nernst potential depends on the ion and hence there are separate batteries for sodium, potassium, and the unspecific third channel, with battery voltages ENa, EK and EL (source: Neuronal Dynamics).

Now to your edited question: you say

[Ion channels] are just switched on and off instantaneously. But this may be oversimplified: it takes some time...

It goes further than that; voltage-operated ion channels like the Na+ channel are actively activated and inactivated with well-defined time constants that, among other things, govern the process of absolute and relative refractoriness of nerve cells (Fig. 2). The temporal gating characteristics in terms of activation and inactivation are expressed as time constants, which can be described in for example a Markov model (Wang et al., 2004). For example,

Similar formulas apply to the association and dissociation constants in ligand-operated channels, where timing of activation and inactivation are affected by the ligand's affinity for the receptor. 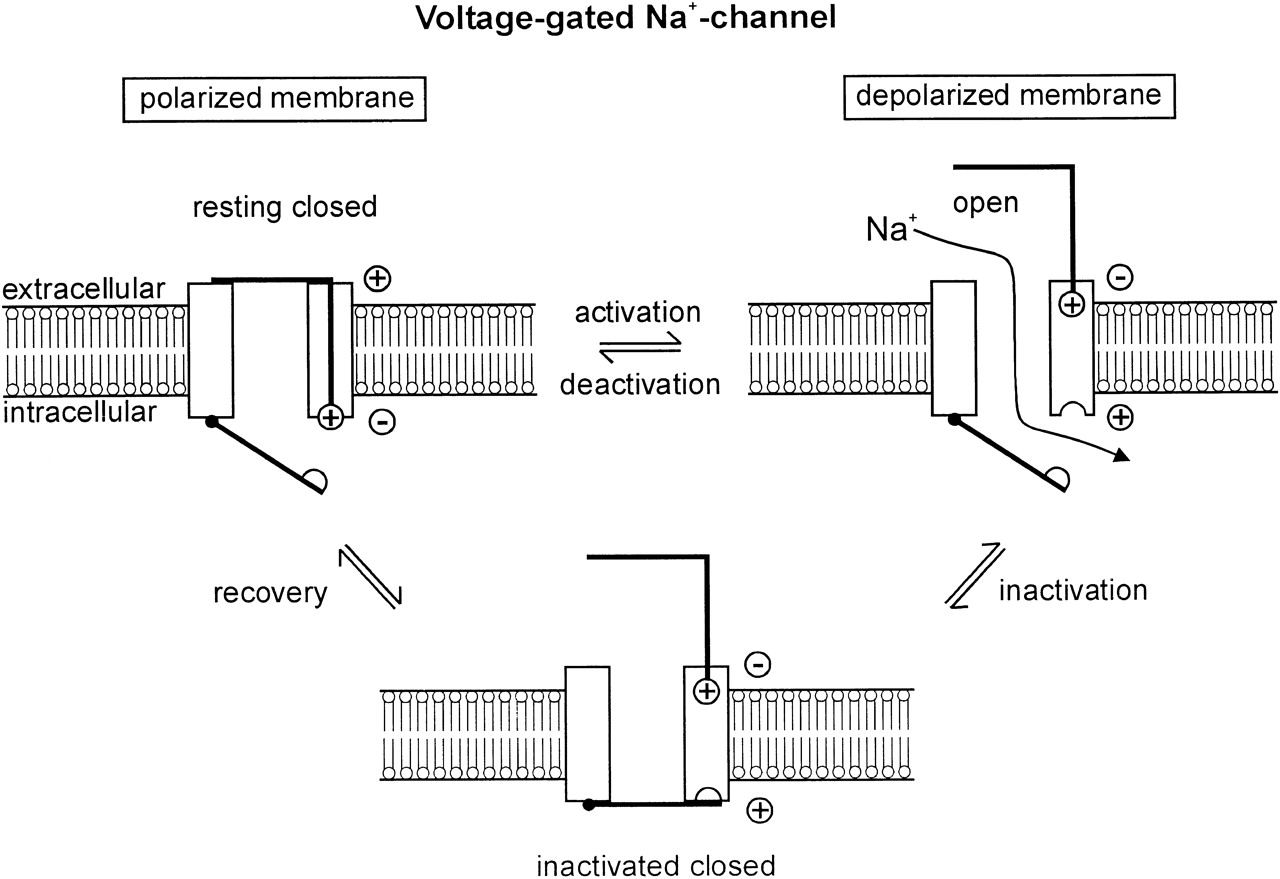 Not the answer you're looking for? Browse other questions tagged memory reference-request theoretical-neuroscience neurophysiology short-term-memory or ask your own question.

2
Determining the position of the calcium ion in the three dimensional space
4
What is a realistic mathematical function to model link decay in a social network?
3
Voltage-dependent ion channels as operators
7
How can different ion channels of the same type have different cell responses?
5
What sources of randomness does the brain use for sampling?
1
Where to find information regarding the effect of ion concentration in the brain on behaviour?