In the digit span test, why do some strategies work and others don't?

I got a free copy of PEBL, psych experiment software, which includes a couple of standard working memory tests.

When I perform the digit span working memory test, I can repeat the numbers as they appear, and do some basic chunking. For example, I can repeat '3-1-8-4' as "thirty one" "eighty four". But when I try any other chunking or rehearsal technique I find it impossible to do the task. I think my working memory just empties. My question is why that happens? More specifically -

Chunking leverages long-term memory for the chunks, i.e. we recognize and remember much easier the familiar chunks, sometimes algorithmically. This is much easier explained in the domain of letters/words, e.g. we'd recognize USA as substring among random letters. Similarly most would recognize the pattern 1945 (WWII end) by paired association, or 12321 algorithmically.

In the classic case of SF he used sequences familiar to him (running times) to greatly improve his performance. More unusual (cf. Memory Search By A Memorist) is Rajan's ability to recognize 13- to 17-digit chunks visually/syntactically, without assigning them meaning. Ishihara, who could memorize overall longer sequences than Rajan [under controlled settings], but was much slower, used a method to convert them into syllables; he was naturally very gifted at remembering nonsense syllables though (cf. Superior Memory).

A few other association methods exist, including with places ("loci"), which relies on visual memory etc. It's possible to train the average person using these and attain significant improvements; the graph below (3rd one bein relevant, but I've included all for the caption) is from a recent PhD thesis. It takes a significant amount of practice/time to become proficient/fast in the encoding/decoding techniques. 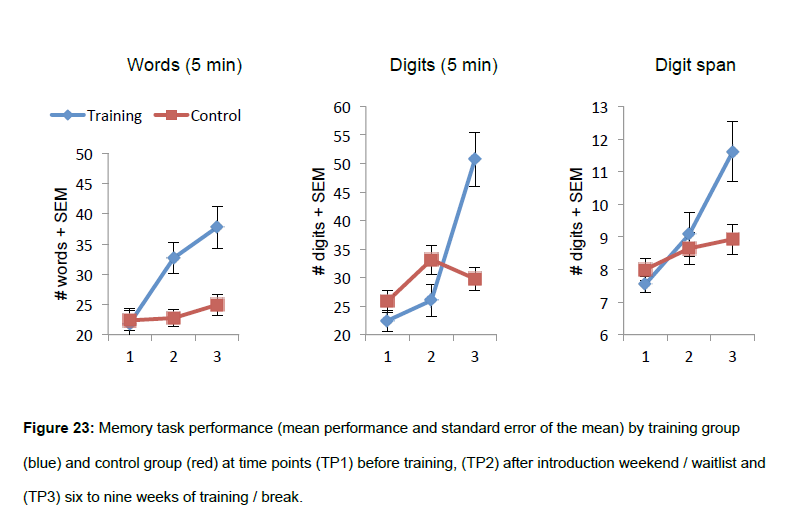 Some clarification in regards to these graphs:

The handful of people (not in this thesis/experiment) who have practiced for years (one of SF's colleagues and two in a replication experiment) have reached 80-100 digits in the digit span test. For that level of performance, not only did they use an associative system, but also a hierarchical chunking method. The chunk size was almost universally 4 for these performers (thus the need for hierarchy). On average it took about 500 hours of practice to decrease decoding/encoding time from an initial 5 seconds to the 1 second required by the digit span test (all this cf. The Neuroscience of Expertise, pp. 110-112).

Not the answer you're looking for? Browse other questions tagged experimental-psychology working-memory brain-training psychophysics executive-function or ask your own question.

3
Does the digit span test draw on any executive functions besides working memory, if “chunking” is not used?
1
What is a Good Working Memory Test Online (or overall if none)?

8
What is the test-retest improvement in Block Design test?
1
About the left and right side of the brain
3
What to call measures obtained between pre-test and post-test?
3
Does the digit span test draw on any executive functions besides working memory, if “chunking” is not used?
4
Is there any reason why chunking the digit span test would not help
0
What is the difference between experience and knowledge and how could we make use of that in machine learning and AI applications?