Is there a waterfall visual after-effect with discrete inputs?

If you watch a waterfall for several seconds and then suddenly change your gaze to a fixed object it appears to briefly move upward.

But if instead you're looking at a scrolling LED marquee sign, does the motion aftereffect still take place? In reality nothing is actually moving on the marquee sign because the LEDs are all fixed in place.

The answer to this question probably has interesting implications as to where in the visual pipeline motion is being processed. The difference between the actual waterfall and the scrolling LED marquee might also be a good way to separate out various aspects of motion processing. I'd be curious in hearing commentary on this.

The waterfall after-effect is an illusion falling into a broader class of visual illusionary apparent movements caused by watching a constant motion for an extended period of time. The motion after-effect can be explained by adaptation of visual neurons that respond selectively to movement. Motion-sensitive visual neurons are tuned to a specific direction. Exposure to a continuous motion in one particular direction fatigues specifically those visual neurons that are tuned to that direction as they continuously fire. When the visual stimulus stops, it alters the balance of activity in favor of cells tuned to the opposite direction, as these are the least fatigued by the stimulus and this causes the after-effect (Mather et al., 2008).

The motion-after effect does work well with more discreet stimuli too.

To start with, here is an example of a more standard waterfall effect illusion (see Fig. 1 for a related impression still image). 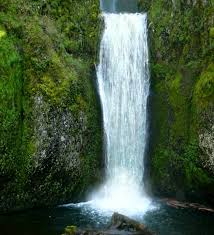 And in this video an example is shown of the waterfall after effect with more discreet stimuli. Not particularly your standard marquee sign but it comes close and there's a definite motion after effect observable (Fig. 2). 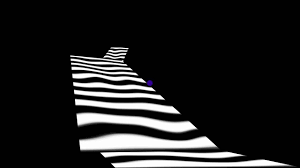 Fig. 2. Movie still from this video

However, I think your question is specifically whether a motion after-effect occurs with chase-lighting as often seen in Marquees signs (Fig. 3).

The chasing-light stimulus in itself is a visual illusion, as there is no true motion involved. Instead, it is generated by using electronic circuitry to activate lights serially with a certain time delay in-between activations. Because there is no motion involved as such, I believe the after effect will not occur, or very weakly. At least, I couldn't observe an after effect after watching several chase lightings for a while. For example, the chase lightings in Fig. 1 become ambiguous when I look at it a while, i.e., the lights actually spontaneously reverse their direction when staring at it for a while. The only thing I see when I look away, personally, is a colorful blob, and no motion after-effect.

Not the answer you're looking for? Browse other questions tagged perception vision neurophysiology optical-illusion or ask your own question.

5
Are there any cognitive models for visual navigation?
27
Why does the human visual system produce a bright patch after staring at a bright light source and looking away?
10
Is there an effect of visual expertise on eye movements when examining an image?
5
What is the name of the effect or concept behind getting along better with people after time apart?
8
Number of presynaptic inputs per cell in primary visual cortex
6
Is there a difference between visual short term memory and visual working memory?
6
Why do those with viral infections feel better after wrongly taking antibiotics?
8
Is there a hierarchy of gestalt visual stimuli processing?
3
Is there visual focus during a saccade?