Ask Question
Asked 3 years ago
Active 5 months ago
Viewed 2k times
2
$\begingroup$
Closed. This question needs to be more focused. It is not currently accepting answers.

It's commonly stated by numerous people that LSD and trytamines like DMT and psilocin are physically harmless and not neurotoxic. Is there evidence for this?

I recently read 5-meo-Dipt which is a tryptamine might be neurotoxic. Why would 5-meo-Dipt be neurotoxic but DMT and psilocin not be? From my understanding some people micro-dose with LSD and some tryptamines to feel sharper and increase felt intelligence.

Why would one tryptamine neurotoxic and others make someone feel more intelligent? Obviously "feel" is self reported and subjective, but I'm assuming there might be some truth to this if people aren't tripping when experiencing these micro dosing effects. LSD isn't a tryptamine, but I think some people do similar things with tryptamines. I'm hoping someone with a better understand of neurology can answer this.

To restate my question are typtamines and LSD generally neurotoxic and if not, could you please link to a study on it and what mechanism makes 5-meo-dipt possibly different, could other factors might have lead to a wrong conclusion, like for example harmful environment stress on rats or do you think all tryptamines are neurotoxic?

I'm trying to understand the possible reasons or lack there of for neurotoxicity in LSD and tryptamines but there seems to be lack of reliable sources.

Short answer
All neuropsychopharmaceuticals, including the tryptamines, are potentially neurotoxic depending on the dose at which they are ingested.

Neurotoxicity is, arguaby, a broad definition. According to the NIH, neurotoxicity can be caused by processes ranging from radiation to transplants, and from chemical toxins to cosmetics. NIH defines neurotoxicity as:

Neurotoxicity occurs when the exposure to natural or manmade toxic substances (neurotoxicants) alters the normal activity of the nervous system. This can eventually disrupt or even kill neurons, key cells that transmit and process signals in the brain and other parts of the nervous system. Neurotoxicity can result from exposure to substances used in chemotherapy, radiation treatment, drug therapies, and organ transplants, as well as exposure to heavy metals such as lead and mercury, certain foods and food additives, pesticides, industrial and/or cleaning solvents, cosmetics, and some naturally occurring substances. 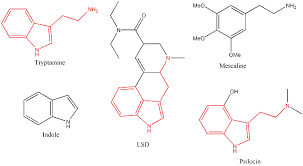 Secondly, every compound is toxic when taken in large quantities. For instance, water can kill, referred to as water intoxication, for example as seen in people tripping on MDMA and taking in too much water (Ballantyne, 2007). Oxygen, another key to life, is a deadly gas when taken in artificially high concentrations for too long. Likewise, neuropharmacologically active compounds will hence eventually become neurotoxins. This, because the definition of neurotoxic is indeed quite broad (source: NIH):

Neurotoxicity occurs when the exposure to natural or manmade toxic substances (neurotoxicants) alters the normal activity of the nervous system. This can eventually disrupt or even kill neurons, key cells that transmit and process signals in the brain and other parts of the nervous system.

Thus when you ask

Then the answer is yes, depending on the dose.

Reversely, then, every neurotoxin becomes non-toxic once taken below a certain threshold dose. If this is what you refer to by 'microdosages', then yes, even the most potent toxin becomes harmless.

To specifically answer your question with regard to LSD and psilocin: LSD is suspected to be neurotoxic at clinically applied dosages (Larsen, 2014), and psilocin can result in convulsions and death follow massive overdose (Gold et al., 2003).

Not the answer you're looking for? Browse other questions tagged neuroscience psychopharmacology or ask your own question.

50
What are current neuronal explanations and models of 'consciousness'?
6
Measuring changes in hemispheric dominance over time
4
How can pain sensations appear to originate within the person's skull?
8
How does one study the effect of a dietary supplement on cognition?
5
Why does optogenetics not mean that perfect brain-computer interfaces are possible?
2
Dopamine dysregulation syndrome in non-Parkison's subjects?
2
Euphoria from oxygen deprivation
5
Do antipsychotics have a delayed onset of action similar to (monoamine) antidepressants?