What challenges the ideasthesia balance theory has to answer?

Ideasthesia "can be defined as a phenomenon in which activation of concepts produces phenomenal experience". The examples vary from the Kiki/Bouba phenomenon applied to (possibly) everyone to actually seeing colors in graphemes like in synesthetic people. According to the theory, "there is a strong similarity between semantics and sensations". 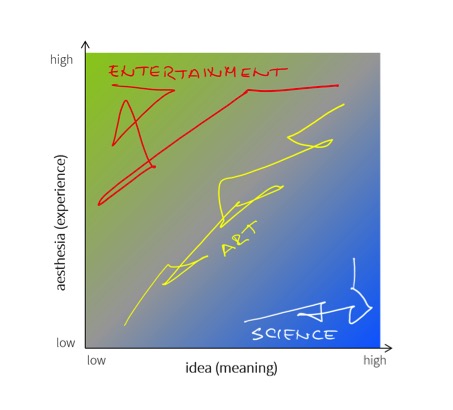 Figure: Sensation vs. meaning balance shown for hypothetical pieces of entertainment (red), art (yellow) and science (white), as they are broken down into their components. Only an art piece is consistently located in the gray area.

Given that this theory is pretty young (first creation in Wikipedia was in 2012 by presumably one avid contributor on the field, based on their username), I wonder if there are any review or critic on the theory. What challenges does it need to answer? Which theory is it incongruent with?

Short answer
Ideaesthesia does not comprise a theory or even a hypothesis. It is merely a term meaning 'sensing concepts' or 'perceiving meaning'.

Background
As Steven Jeuris also comments, ideaesthesia is not a theory, it is simply a term. It is a combination of two Greek words, namely 'concept' or 'idea', and the other is 'sensation', or 'aisthesis'. In translation, ideaesthesia means sensing concepts or perceiving meaning (source: Danko Nikolić).

It it used to denote phenomena as the Kiki/Bouba effect (Milan et al., 2013; Martinez & Milan, 2015) and synesthesia (Jürgens & Nikolić, 2012) as you write. These phenomena are associated with assigning shapes to names, and colors to graphemes (and the likes), respectively. As far as I can see, ideaesthesia does not explain anything, it is not an observation, it is not a hypothesis, let alone a theory. It is a term used to group phenomena where people associate seemingly unrelated concepts.

Further, for what it's worth, a cursory Google Scholar search on 'ideaesthesia' yields few hits (82), and those hits that pop up, in part referenced here, point sometimes to questionable journals or to irrelevant papers. I would hence use the term cautiously as it doesn't seem to be widely used.

Not the answer you're looking for? Browse other questions tagged reference-request creativity aesthetics ideation or ask your own question.

174
How is it that taking a break from a problem sometimes allows you to figure out the answer?
21
Evolutionary game theory in the cognitive sciences
10
What research exists in the areas of formulating questions and "problem shaping"?
3
What introductory material is available linking complexity theory to cognitive science?
6
What does scientific research say about the relationship between penis size and attractiveness?
10
What research has been done on brain-to-brain interfaces?
1
What is the consensus on the Golden Rectangle?
3
Has the labelling and overshadowing effect from the Hannah Experiment been replicated?