If a sensory input is perceived, one needs to process this input from the sensory end organ (sensation) up to the brain (perception). Does a more more complex neural network consume more time than a simple one? For example, does a house fly process visual images faster than a human being?

For example, if we look at the pain response, the reflex arc is very short, covering as little as two synapses (Fig. 1). The moment you touch a hot pan, you pretty much instantly draw away your hand. This process precedes even before you become consciously aware of the fact you touched something painful. This is because conscious awareness happens in the brain, involving a longer distance to be covered from your finger, and because it involves many more synapses including the brainstem, lower cortical areas and higher cortical areas (Fig. 2).

Processing time does not necessarily have to increase when processing complexity is increased, as long as the processing takes place in parallel. For example, multiple visual pathways in the human brain run in parallel, for example the 'what' and 'where' processing in the brain in the ventral and dorsal streams (Van Polanen & Davare, 2016), as depicted in Fig. 3. 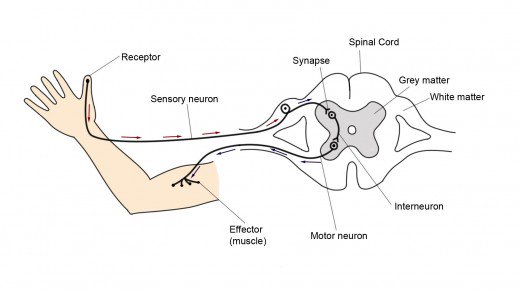 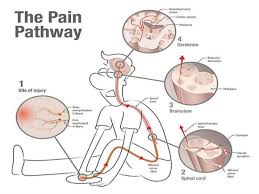 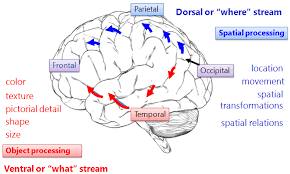 Fig. 3. Parallel processing of 'what' and 'where' information in the visual system. source: Brainscape

Not the answer you're looking for? Browse other questions tagged neuroscience perception cognitive-neuroscience neurophysiology sensation or ask your own question.

5
Does each sensory neuron type have a characteristic spike sequence pattern?
8
Neural Mechanisms of Accumulation and Triggering
9
How does masking work?
4
Does the human visual system implement (adaptive) histogram equalization?
4
How does the brain project pain on to a particular part of the body?
7
How does the neocortex distinguish between perception and imagination?
4
Does the peripheral nervous system processes information like central neurons do?
1
What is the bandwidth of visual perception?