What is the computational role of the cortical column?

The cortex is supposedly composed of semi uniform cortical columns that are interlinked. Many of the resources on cortical columns I found using a Google search do not discuss what a column computes (i.e., a high dimensional prediction) but rather only provide its basic structure (L4 connects to L2/3, etc.).

I would be very grateful if someone could direct me to resources discussing the computational roles of a column.

Cortical columns are groups of neurons in the brain that are oriented perpendicularly to the cortical surface. Cells within a column respond to the same stimulus property (Fig. 1). For example, primary visual cortex columns extract small bars with a specific orientation.

A single cortical column consists of six distinct layers of neurons. The upper three layers (I-III) are functionally distinct from the lower two layers (V-VI). The upper layers project out to other cortical columns, both sending and receiving signals, with layer III cells projecting to adjacent columns and layer II cells projecting to more distant parts of the cortex. Layers V-VI receive input from the upper layers of adjacent columns and send their signals to extracortical structures, such as the thalamus, and motor and sensory centers.

Information flow in the cortex is mediated by the action of the supragranular cells, while additional information from the external and internal environment is integrated by the thalamus and arrives in layer IV of the cortical columns.It contains thousands or even tens of thousands of neurons corresponding to a few tens of micrometers and up to 1-2 millimetres for larger aggregated columnar structures (sources: Rice University and Phys.org news).

The presence of cortical columns is quite firmly established. However, the histological definition, as well as the function of various types of columns are dramatically different. Columns can be defined by cellular histological feautures, pattern of connectivity, myelin content, staining property, magnitude of gene expression, or functional properties. For example, in the primary visual cortex alone, there are ocular dominance columns, orientation columns, hypercolumns, and color columns.

Further, there are columns as well as various minicolumns. The only connections between these diverse structures and concepts is that they refer to the vertical or radial columnar organization of its elements as opposed to the horizontal or laminar organization that is more explicit in histological preparations of the mature neocortex. Thus, the term cortical “column” is used in so many ways that it needs specific clarification of the specific context in which it is applied (Rakic, 2008).

Even stronger assertions have been made, up until

...the disappointing realization that the column may have no function...

Having said that, and to home in to the computational processes within a column - some sources claim that columns are capable of memorizing relations and performing more complex operations than individual neurons. If a neuron is analogous to a logic gate, a cortical column may be viewed as a small subroutine. Columnar information processing may involve the column to be fully or partially activated. A fully activated column corresponds to an action, e.g. in a column in the motor area, layers V and VI may project to a sequence of neurons that contracts muscle fibers. A partially activated column corresponds to anticipation or searching, and waits for the lower levels to become active.

In this view, a column can be looked at as an adaptive automaton. An automaton being a function that chooses an action based on its current state and its inputs. Cortical columns may thus represent a goal and the initial and intermediate states. When a goal is defined, activations spread from the goal column along the upper layers (I-III). The spreading activation from columnar goals and the subgoal process of problem solving is called a Call Tree, because of the way the subgoals are solved by a recursive search (source: Rice University). 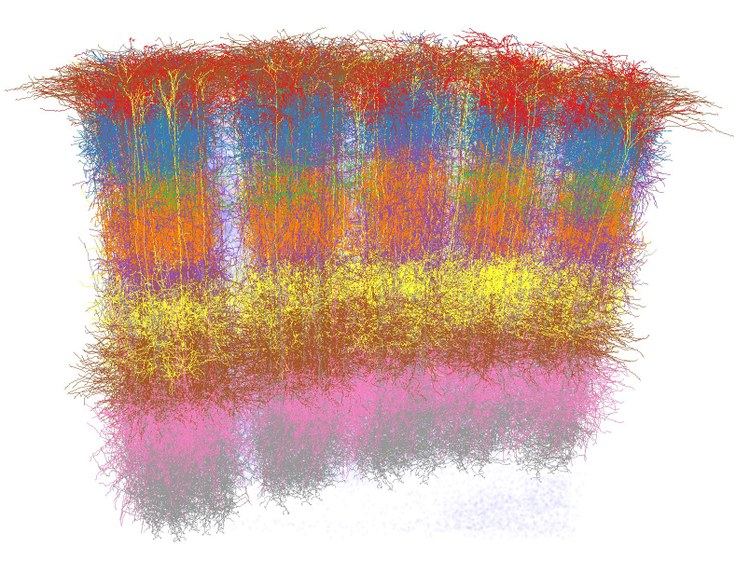 Not the answer you're looking for? Browse other questions tagged neuroscience cognitive-neuroscience reference-request computational-modeling neurophysiology or ask your own question.