Correlation between "mechanical aptitude" and IQ

I am an economist working in labour market issues. It is common in my field to divide jobs between those who are intensive in "manual" tasks and those who are intensive in "cognitive" tasks (e.g. here). I want to find evidence about the correlation between the "ability" these jobs require. In particular, I am looking for studies showing the correlation between "manual ability" (perhaps mechanical aptitudes, dexterity, etc) and "cognitive ability" (perhaps general intelligence, IQ, etc).

Most of the references I have found are literally from the first half of last century (e.g. here, here, here, here, here, or here, including work by Spearman, which apparently started this line of research, and has become widely used as a description of different types of "intelligence").

Interestingly, the first old reference above, in page 8, finds a high degree of correlation (0.6 to 0.7), whereas the second old reference states that

but does not provide references. The third old reference, in page 101 of the pdf document, states that the correlation is low (below .30).

So, I am not satisfied with these references. Can you suggest me better literature? Am I using the wrong concepts? Are the references provided above "sufficient"? Any guidance on these issues is very much appreciated!

Can you suggest me better literature? Am I using the wrong concepts? Are the references provided above "sufficient"?

I recommend you take a step back and ask yourself what your question is, and perhaps more importantly, why it is you're asking it. Only then will you have a better idea of what you consider sufficient.

I am not satisfied with these references.

Unless I had the actual dataset, then I would find nothing satisfactory. This is because I am a weirdo. Depending upon your aims e.g. consultancy work versus PhD thesis versus simple report, perhaps you feel the same way as I do.

If I am correct, then you are in luck: this is not a new question. There is good data regarding this matter from the United States Army, partly because they keep very good records, partly because cognitive ability is the basis of eligibility into various military roles.

Regardless, IQ remains the best predictor of job performance. Let me dig up some references for you, but I would suggest you don't get distracted by the concept of "other forms of intelligence". In the parlance of biological psychiatry, consider dexterity to be an endophenotype for success in living a successful life as a manual labourer but one that does not fully reflect your endpoint of interest as an economist. This is not to say that I don't believe that they exist, but that as far as you're concerned, perhaps they're thoroughly irrelevant.

I note that you reference one paper:

Having read this paper, I note that it reports IQ scores for various occupations. While I wouldn't say it's precisely what you are after, I would have thought that it's very close in spirit to how I am interpreting your question.

For example, it reports the following correlations: 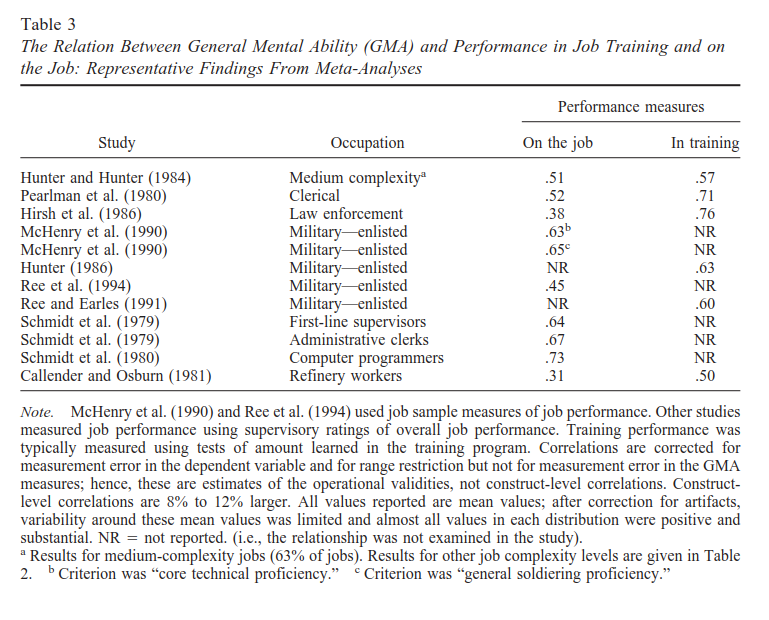 These occupations are not relevant to your question, but reminiscent of the data that I anticipate you're looking for. So this begs the question: what precisely is your interest? Do you actually care about dexterity, or physical coordination, or do you view them as some meaningful intermediary to your actual interest in work-related outcomes?

Depending on the type of person you are, and how important the question is to you, you may wish to consider answering the question yourself. To be honest, if I really wanted the data, and the data did not exist, I would not settle for anything less than this.

For example, have you ever considered approaching a particular personnel selection company, or perhaps even better, industry stakeholder to conduct such a study themselves? Here, you would identify a nice, exemplar industry that is of particular interest to you, say, truck drivers, and obtain performance ratings of all the employees. As a pilot study (e.g. n = 20), you would then randomly select two samples, one from the the bottom quintile and one from the top quintile of job performers. Perhaps the bottom quintile would represent workers who have or are about to be fired.

You could then perform a computer adaptive test (CAT) of ability and get a fast and accurate estimate of IQ; if this is worth pursuing further, you would hope to see a robust difference in cognitive ability between the two groups. Adaptive testing applies item-response theory to get a more accurate measure of the latent construct (intelligence) than classic test theory because the questions that are presented to the subject are contingent on their running estimate.

The benefit to the funder of this research is that they would have a financial incentive to predict job performance; as an economist, I am sure you can tell me the difference in productivity by way of $$$ the top performers earn a company relative to the average performers. Just remember, it may be illegal to hire someone based on IQ, but "aptitude testing" is acceptable.

Job performance as a function of baseline cognitive ability

Also, an interesting counter-claim to consider is that while there might be little correlation between cognitive ability and job performance in manual labour employment, there could certainly a floor level of ability required for performance . I must admit that I have not previously entertained such an idea, although it is certainly perfectly tenable: 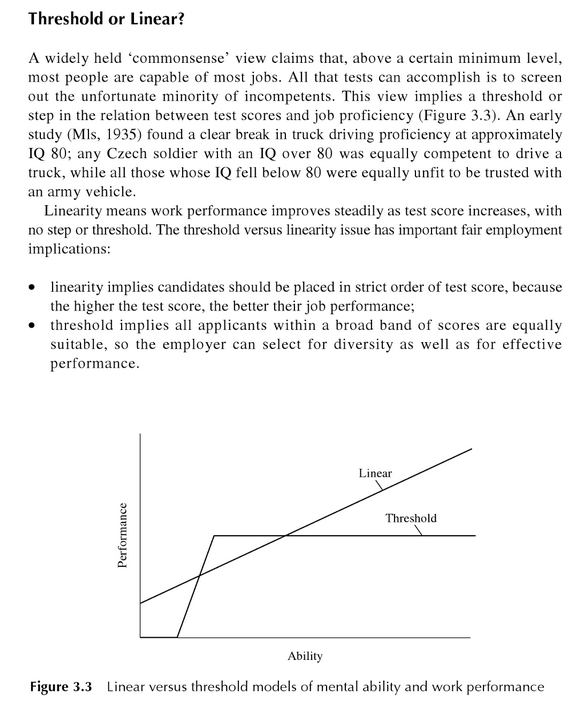 I would look at the research into natural abilities (including mechanical) being carried out by the Johnson O’Connor Research Foundation. Schmidt’s work, to my mind, is so broad and at population level. He basically posits that people with a higher IQ can basically do any job better than those with lower IQ. This is clearly nonsense. A high IQ lawyer, I suspect, would struggle to fix a mechanical problem that a low IQ technician could finish in minutes.

Not the answer you're looking for? Browse other questions tagged measurement reference-request intelligence iq correlation or ask your own question.