What, other than humans, can possess an IQ? [closed]

Want to improve this question? Add details and clarify the problem by editing this post.

Dolphins and some birds (crows and parrots for example) are considered to be 'smart'. This made me thinking - What animals, other than humans, can possess an IQ, perhaps even at a very low level?

Short answer
IQ tests are designed to compare individuals within a given species. IQ tests for other animals than humans have been devised, however, and give insights in the distribution of smartness in other animalia.

Background
What is 'intelligence' within the confines of an IQ test?

David Wechsler – the creator of the most widely used psychometric IQ test, the WAIS – defined intelligence as:

the global capacity of the individual to act purposefully, to think rationally and to deal effectively with his environments.

Our general intelligence (G) can be understood in terms of 3 underlying dimensions, made up of 5 factors (source: IQ Mindware): (1) our knowledge base (crystallized intelligence) (2) our thinking skills (fluid intelligence, visual intelligence) (3) our cognitive efficiency or ‘brain power’ (processing speed, working memory/short-term memory)

IQ tests are generally administered behind the computer, or using pen and paper. This in itself is a rather challenging and cumbersome approach, even for the smartest dolphin around.

Indeed, IQ tests are made for humans and in fact, they are designed for educated people that have learned to read and write and know the difference between a triangle and a square. Many people around the world don't know what a trapezium looks like. They haven't had the education and likely, above all, They do not need to know it and yet be considered wise and smart in their communities.

To put this differently, IQ tests are a Western construct designed for developed countries -

An IQ test is designed such that the average person in the population targeted by the test scores 100 (Fig. 1). The distribution around that 100-point average takes the shape of a standard bell-shape curve. 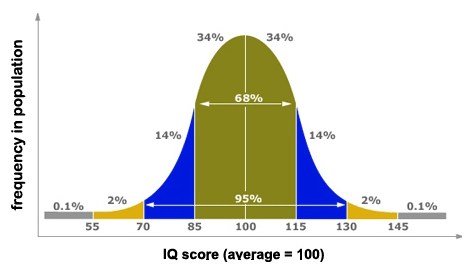 In humans, factors like education and socioeconomic status can affect performance. Hence, even within the human species the test may rather reflect educational status and hence can even mirror dad's well-paid job who happened to be able to pay for a respected University Fee.

Importantly, for your question, IQ tests are designed to compare people, i.e., they are tests to compare the abilities of individuals within a species. And it goes further, they are tests with a certain reference population, namely well-educated white folks, to put it bluntly.

So to extrapolate IQ tests to other species is difficult, because intelligence tests need to be designed and administered such that they measure the overall smartness, and not just a specific set of skills, such as the keen memories of food-hoarding birds or the fine motor skills of chimpanzees that make tools for finding insects in trees. Further, differences in animal test scores can depend on how motivated they are to perform the tests. Because most experiments with animals are carried out using positive reinforcement (food rewards), animals with full stomachs won't be driven to perform well and hence may get low outcomes. To be blunt again - satisfied animals will look stupid. Thus, even studies that suggest variations in intelligence among animals, including humans, carry the caveat that they might be skewed by motivational issues (source: Science Magazine News, 2016).

Nonetheless, researchers have been trying to develop tailored IQ tests to other species. For example, in one study on New Zealand robins (Fig. 2), IQ was defined and tested on six different tests to measure various skills thought to be linked to the specific types of robin cognition, namely the ability to acquire, process, and act on information about the environment. In a test of motor skills, for example, the birds learned to flip plastic lids, one of which had a tasty meal worm at the bottom. In another test the ability to distinguish colors was quantified. In this test birds had to figure out whether the worm was hiding under a red or a blue lid. To show they could distinguish symbols, they had to discern whether the worm was under a lid marked with a cross or a square. And because these robins store food for the winter, the scientists also measured their spatial memories. They saw how well the birds could remember in which of eight wells the researchers had hidden a worm (source: Science Magazine News, 2016).

The robin experiment showed that between 34% and 45% of the differences in the robins’ overall performances could be explained by a similar general intelligence factor, suggesting that the birds’ performance is not just due to their talent on individual tests, but to their overall level of intelligence. Among humans, researchers have found that general intelligence can account for about 40% of the individual differences in IQ-type test scores. In other words, a battery of different, well-designed tests appears to be measuring overall intelligence rather than simply how well a person does on each individual test in humans and robins alike. 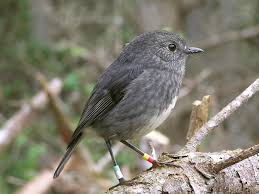 Not the answer you're looking for? Browse other questions tagged animal-cognition iq or ask your own question.

16
Do only humans spend a lot of time daydreaming (or having “stimulus-independent thoughts”)?
8
Transsexuality in animals other than humans?
24
What, if anything, sets humans apart from other species?
10
Why are humans the only species to maintain relationships with other animals simply for pleasure?
1
Do animals have some kind of rudimentary personality types or preferences?
5
How does an animal learn what a predator is?
5
Can animals develop mental disorders that are unique or similar to our own?
1
Can't we teach other intelligent animals “complex” languages?
0
Do animals know about choices?