What does it mean for there to be more variance within groups than between groups in IQ?

I was watching a short YouTube video that comments on the validity of IQ. That video contains the following claim (verbatim):

"You know nothing about a person's intelligence on the basis of his or her skin color. That is just a fact. There is much more variance among individuals in any racial group than there is between groups..."

This was shortly after he stated that there are real differences in the average IQ of different races.

I find the bold statement confusing and am not certain how to interpret it. I understand what variance means when discussing a single probability distribution however, my learning never extended to variance between distributions. Could someone please explain how this is done and more importantly, why this measure justifies the first (non-bold) statement?

"You know nothing about a person's intelligence on the basis of his or her skin color. That is just a fact. There is much more variance among individuals in any racial group than there is between groups..."

The first two sentences are wrong. The final sentence is true. It is presumably motivated by the idea that we should not infer properties of a group to the individual especially where such inference will result in discrimination.

Empirical perspective: As an empirical point, racial and national differences in intelligence test scores are well established in the literature (for a review see https://en.wikipedia.org/wiki/Intelligence:_Knowns_and_Unknowns). There is plenty of debate that can be had about what this means (i.e., to what extent does it reflect genetic differences versus environmental conditions? in what ways do standard IQ tests fail to measure aspects of intelligence that might be of interest? To what extent are differences declining with reduced inequality and improved living conditions? etc.). But as an empirical point, I've often seen studies with many thousands of people find differences between racial groups in the vicinity of one standard deviation. By conventional rules of thumb, this is a large difference.

Statistical perspective: If groups differ on a variable, then you can use knowledge of group membership to improve your prediction on that variable. For example, occupation predicts income. If I know someone is a doctor, I can predict that they earn more money than other people. As group differences get larger, so will be the improvement in prediction that is provided by knowing group membership.

This raises the question of how big group differences need to be before you could say that "you know something about a person based on group membership". Presumably, such inference are partially based on practical and ethics issues related to over generalization. In general, group differences need to be extremely large (perhaps 2 or 3 standard deviations) before the overlap between group distributions gets small.

Legal/ethical perspective: More importantly, generalizing from groups to individuals is illegal in many contexts. For example, many countries have legislation that aims to prevent the use of age, race, gender, religion, etc. as the basis for making employment, education, and other defined decisions. Thus, even if membership of these categories is predictive of something relevant, decision makers are forbidden from using this information. Rather, if they want, for example, to use intelligence scores to influence hiring decisions, then they need to actually measure intelligence, rather than rely on a meta-analysis that shows that the group to which the applicant is a member tends to score higher or lower.

There are many good reason why such a legal regime is ethical and desirable. From a practical perspective, measurement will be far superior if you actually measure the thing of interest rather than inferring it from group membership. Furthermore, in many cases, people base their beliefs about group differences on stereotypes with no empirical backing. But more importantly, it reduces the perpetuation of social inequality. It focuses attention on the skills, competencies, and capacities of the individual.

In the video he is discussing some work of Charles Murray (not sure how familiar you are with it). In any case, the main point of your confusion comes from the difference between presence and size. Dr. Harris admits that there are differential IQ values between the races: there is (presence) a difference. The immediate follow up, though, is that the size of that difference pales in comparison to the variability with the group, indicating that no practical conclusions can be made.

For a silly example (and not leave any Earth groups out), consider Martians and Plutons (poor Pluto...): Martians may have a slightly higher IQ than Plutons, but the variability within each group is much higher than the between group difference. Dr. Harris' whole point is that, upon meeting a random Pluton and a random Martian, you practically have no idea which of them will be smarter, even though we know that Martians tend to be smarter. A pretty picture illustrates the two groups below. 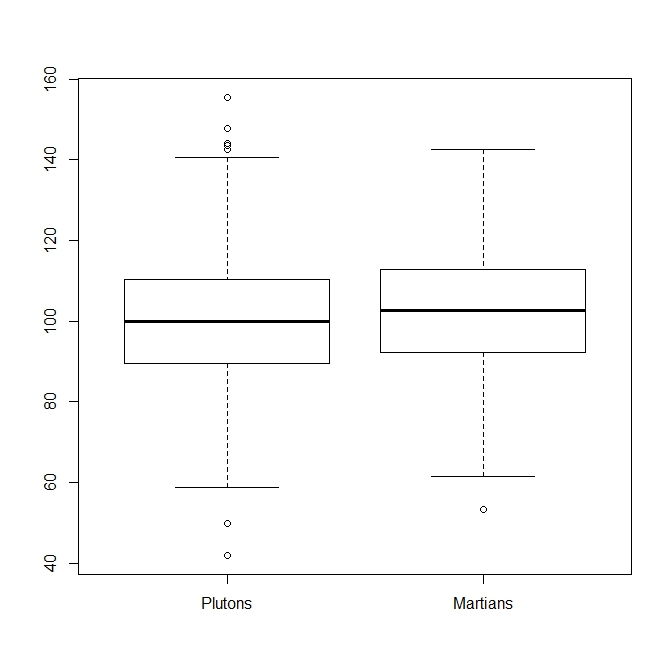 Not the answer you're looking for? Browse other questions tagged measurement iq or ask your own question.

3
Is there a scientific consensus on the cause of IQ gap by race?

3
Are cortisol measures more reliable than self-reported fear measures for looking at difference scores?
4
How does one make a decision between different cognitive tests for the same construct?
4
Is there a downside to using more than the typical 20/40 trials in an IAT?
4
What does it mean statistically for there to be significant differences in average IQ scores between racial groups?
1
What time range between 2 measures for test-retest reliability?
2
When the DEA says a drug is X times more potent than another, what do they mean?