How does the brain process generalizations?

How does a generalization live in the brain? What's the current thinking on how it is encoded?

Medieval philosophers point to such abstractions (that are not material timeless "things") to argue that something itself not material and timeless must exist to "sense" them i.e. a soul. Which is hogwash. But how does one state the nature of such things in terms of human cognition? What is going on when we consider such abstractions?

The thing that comes to mind first are the Gestalt principles. Up front - the Gestalt theory of perception has been criticized as being a descriptive theory, and not providing much insight into the processes that lead to perception.

However, the principles do address your question, as the Gestalt theory dictates that humans visually and psychologically attempt to make order out of chaos, to create harmony or structure from seemingly disconnected bits of information. Much of the principles deal with figure/ground separation, but an important other aspect is similarity, and specifically

Gestalt theory states that things which share visual characteristics such as shape, size, color, texture, or value will be seen as belonging together in the viewer’s mind.

The similarity principle claims that elements tend to be integrated into groups if they are similar to each other.

Accroding to the excellent book The Big Book of Concepts by Gregory Murphy, in the prototype view every category is represented by a summary of representation features, with weights for each value of each dimension (e.g. color, hair length). When a new member of the category is encountered we add weights of the present features and subtract the weights of it's features that are not parts of a category, and if above a certain threshold then it is judged to be in category. The prototype is the generalisation that you are looking for.

This is an extract from the book The Big Book of Concepts by Gregory Murphy : 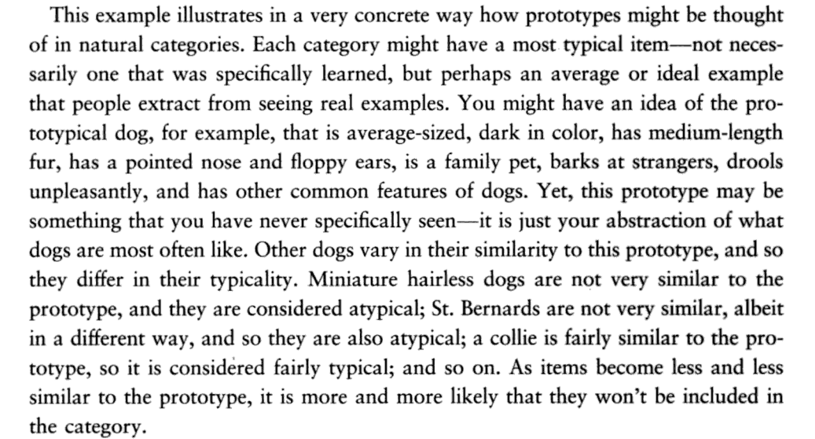 Perhaps you are interested in the study to analogy making. According to Wikipedia, an analogy:

[...] is a cognitive process of transferring information or meaning from a particular subject (the analogue or source) to another (the target).

An analogy is often considered between to somewhat seemingly unrelated subjects (e.g. an atom vs the solar system), sharing an abstraction, i.e. a general abstract concept. This abstraction may be similar to your "general idea of a cat", which can be specified to specific kind of breeds.

A quick google search resulted in the following review (French, 2002) of computational models that try to explain analogies. In short, there are symbolic models, connectionist models and hybrid models that each use different approaches. The rather unsatisfactory conclusion of the paper is:

Not the answer you're looking for? Browse other questions tagged cognition or ask your own question.

5
Conceptual representations in brain by distributed groups of neurons

4
What is the difference between emotions, intuition and affect?
4
Does taking antidepressants, anxiolytics and sleep pills significantly affect a person's intelligence?
8
Does learning (to play) music increase IQ?
5
What does it mean statistically for there to be significant differences in average IQ scores between racial groups?
1
What is the scientific term for the erroneous inversion of cause and effect?