What stops this (one weird) hypnotic trick having the reverse effect to intended?

In one of his endless Blogs about Trump and hypnotism, Scott Adams, creator of the comic Dilbert, claims that by showing an image of Trump's book and his own book side-by-side he can hypnotise you into thinking his book is important. 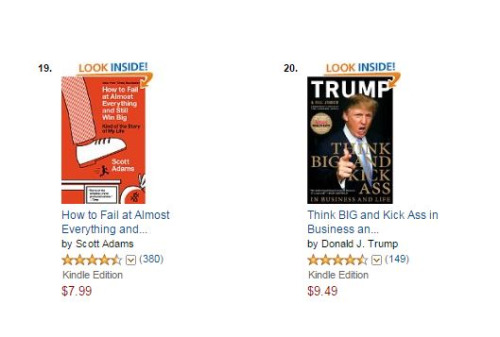 Trump is a business tycoon/president/mysogynistic-dinosaur/fork-and-spoon-operator. Whether you love him or hate him the view is widespread that Trump is an important guy. When I see Adam's book next to Trump's my hindbrain says, 'Oh, this Scott Adams guy must be as important as Trump to have their books side-by-side'

I believe that is true to some nonzero extent. It might be huge; it might be tiny. I am not interested in debating the exact size. My question is why does this trick not have the opposite effect?

Scott Adams is best known for drawing cartoons for cripe's sake? Unlike Trump, Scott Adams is not a household name. Why doesn't the hindbrain see both books and say, 'Trump's book next to Adam's? That nobody!? Gosh I guess Trump was not as important s I thought.'

If the association goes one way, what's to stop it going the other?

Browse other questions tagged hypnosis or ask your own question.