Why do some people refuse to wear their seat belt while being aware of the risks?

I have multiple friends that simply refuse to wear their seat belt whenever they ride in a car. I make them wear it when in my car, but in any other situation they choose to go without it. They are all aware of the risks of not wearing their seat belt and the implications of even the smallest car accident, so a lack of knowledge is not the problem. Also, I consider them all quite intelligent people, so the ignorance of such a simple task that can be life saving blows my mind.

I cannot see it a denial of evidence because they agree with my side of reasoning, and my question is not specific to my friends, so I am asking why would anyone who knows all the facts still proceed without a seat belt?

I think this is a rather difficult question to answer. Psychology Today sums up some interesting reasons why people totally aware of the risks involved in not wearing a seat belt (or in smoking tobacco products, alcohol abuse, dangerous driving...), still choose not to wear one (light up another cigarette etc.):

All of these risks involve a sort of "near-sightedness". We focus on the next one-not on the long string of behaviors. We tend to think that the "next time I go out driving without my seat-belt, there is a very low probability that I will get killed". This is true, but each time increases the probability.

The underlying problem is that our primitive brains battles itself over short-term rewards versus long-term goals. As a regular quitter of smoking (I've stopped so, so many times) I know this more than anyone. The short-term reward is more important than the long run. Impulsive choices or preferences for short-term rewards result from the emotion-related parts of the brain winning out over the abstract-reasoning parts. Psychological factors other than pure reasoning often drive people's decisions, for example the small nuisance of the seat belt or the dangers of long-term smoking loose over the improved comfort of driving without a seat belt and activating the dopamine release in our limbic system when smoking a ciggie.

Our evolutionary more ancient emotional limbic brain has a hard time imagining the future, even though our logical, evolutionary more recent neocortical brain (Fig. 1) clearly sees the future consequences of our current actions. Our emotional brain wants to max out that credit card, order dessert and smoke a cigarette. Our logical brain knows we should save for retirement, go for a jog and quit smoking. Quite apparently, the primitive emotional brain often tips the balance and defeats the newer evolved logical brain. 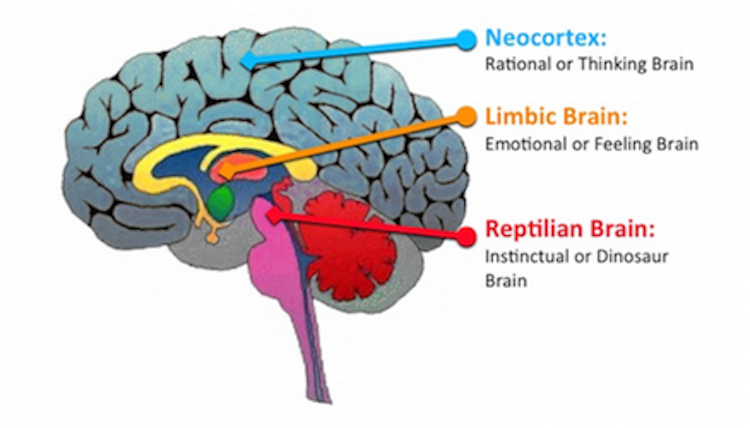 Despite the neatness of the Hyperbolic Discounting idea in the first answer, I think it extremely unlikely that anyone would find putting a seatbelt on so much of a hassle that the reward gained from avoiding it is worth anything at all, let alone worth taking a known risk.

There are much more nuanced theories as to why people take risks that would cover this situation better.

One that comes to mind is Sykes and Matza's neutralization theory (originally developed to explain moral shifting) applied here http://onlinelibrary.wiley.com/doi/10.1080/0007131032000045888/full to denial of risk from cannabis, but applied in other areas of risk perception also.

Perhaps even more likely here is the concept of Risk Denial as part of a construction of a safe world view as in this study for example http://journals.sagepub.com/doi/abs/10.1177/0022022191221006 . Essentially what happens here is that people fail to mitigate risks (such as with driving in the OP's example) in order to help them construct a safer world view in which the risk does not exist, by acting as if the risk were not there at all.

Here is an article relating the issue to smokers, but the same research has been done on AIDS denial, Adolescent risk-taking, and heart-disease.

The same has been posited as a reason why it has proven so difficult to establish proper hand washing regimes in high risk areas (such a hospitals and day-care). The theory being that if the practitioners there could not easily cope with the reality of working in an environment with such high (and importantly, unobservable) risks, so they have to act as if they weren't there as a coping mechanism. Again, hyperbolic discounting (the hassle) has been cited as the most lilkley reason, but research such as this shows it to have very little statistical influence. Video capture of hand-washing practises in hospitals with sensors have even shown people crawling under the sensors supposed to detect whether they've washed their hands properly or deliberately turning on the water to activate the sensor but not actually washing their hands.

It obviously would show considerable weakness of character (by society's standard, not mine) to admit this inability to cope so it rarely crops up in self-reporting. I personally wouldn't take the agreement with the existence of the risk verbally as anything other than superficial.

It is likely that people who take risks such as not wearing a seatbelt simply can't cope with the risk of driving and so have to deny it exists and reinforce that denial by their actions.

9
Denial of evidence and reason
3
Psychology of disrespect and being proud of law breaking. How does it work and how to combat it?
1
Organisation as a factor for safe behavior on the work-place

8
Why do some people seem to disregard the choice of doing nothing (The Zero Choice)?
7
Why do some people only work well under pressure?
9
Why do people often do unnecessary things while performing a main task?
13
Why do many people play Candy Crush without ever buying anything while some spend all their money on it?
3
Why some people feel their skin itching when they're told about insects and no insects happen to be nearby?
3
Why are some people jealous of other people's success?
1
Why are some of us attracted to certain women while others are not