Is it true that stimulants and the neurotransmitters they mimic, push into the synapse, or keep in the synapse (e.g. dopamine, norepinephrine, acetylcholine) make neurons fire more often, while inhibitory depressants (e.g. GABA) make them fire less often?

For example, glutamate is the principle excitatory neurotransmitter in the central nervous system (contrary to what you pose in your question!). Glutamate (Glu) has multiple receptors associated with it. Each and every one of them has an excitatory effect on the postsynaptic neuron. For example, NMDA receptors are ligand-operated cation channels and binding of Glu causes the channel to open. Influx of Na+ depolarizes the neuron and increases the likelihood it will reach firing threshold. Likewise, AMPA receptors lower firing threshold by opening of Na+ channels, as does acetylcholine abundant in the peripheral nervous system. Note that the metabotropic Glu receptors have other, indirect effects on the cell.

Inhibitory neurotransmitters like GABA, being the principal counterpart of Glu in the central nervous system operates by opening Cl- channels associated with the GABAA receptor. Influx of negative charge hyperpolarizes the neuron and hence increases firing threshold and hence causes the postsynaptic neuron to fire less often. Dopamine receptors are of the metabotropic class and have more indirect effects. 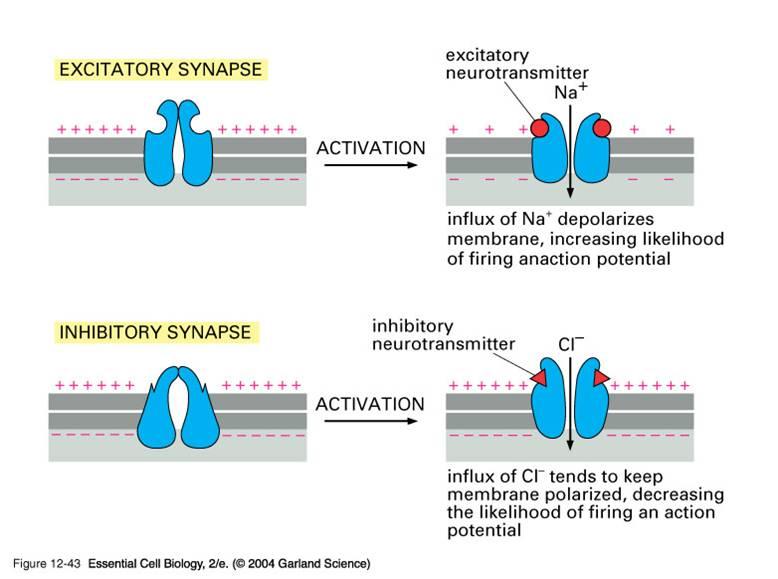 12
Which neurotransmitters can be measured in a living human brain?
18
Is serotonin conclusively linked to depression?
9
What is the difference between pre-synaptic versus post-synaptic?
5
What's the relation between firing of dopaminergic neurons and dopamine dispersion in terms of neurophysiological processes?
5
Do antipsychotics have a delayed onset of action similar to (monoamine) antidepressants?
7
Probiotics and Mental Health
4
Integrated Information Theory - If correct could humans create artificial consciousness?
0
Principles of grouping neurons