How to explain emoticons to an autistic person?

I am currently chatting in an IRC and there is one girl (i think she's about 18 years old) and she has Asperger syndrome and therefore is unable to understand countenance and feelings. She told me that she only knows of happiness, sadness and rage but doesn't really understand what each means.

Furthermore the other people use emoticons like :), :(, >:[, ^^, ... and she really has problems to follow the discussion because she is really confused about all of this and when I tell her what each emoticon means five minutes later she will not be able to distinguish between these.

Do you have any suggestions on what to do to reassure her and maybe help her a bit so that she could enjoy the chat like everyone else, more or less? (Although I know she won't understand everything...)

For neurotypical person, a typical use-case for I understand you phrase is I know what you feel. But autistic people by understand mean in the first line to know the cause-and-effect. So your friend saying she don't understand what really each emotion means, could as good mean: I don't know how particular emotions are affecting the meaning of words the given person use.

I'd like to expand on volkerjaan's answer. I am Asperger myself. I know what :-), ;-) and ;-( mean (though I know ^^ only as see above). I don't necessarily understand when people are using them. I do understand their origins, and I suspect that is what the question boils down to.

To explain what they mean:

To follow the conversation, it is not needed to understand the meaning. It is enough to know the meaning. In my interpretation, understanding is related to why. As an Asperger, the ability for abstraction is often different from those in neurotypicals. So I would explain it as follows.

When we draw a face, we like to simplify things. For example, sometimes we draw only a circle with dots for the eyes, and a line for the mouth. For example, from the Wikipedia article on smiley: 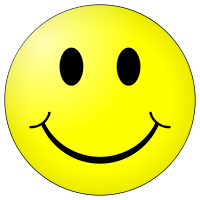 When we are on IRC, or in another text-only medium, we do not use pictures. Therefore, we need to make drawings in a different way. One way to make drawings on IRC is by using characters normally used for other things. This is what we do when we use emoticons.

A emoticon is a sideways drawing of a face. To see it in the correct orientation, turn your head to the left, so that you see the : or the ; on top, the - in the middle and the ) or ( at the bottom.

People use the wink when they mean I am joking.

There are many other emoticons, but those are the most used ones. There is a list on Wikipedia. This lists the meanings, but it does not explain any of them. I don't know if there is a website anywhere with explanations. Sometimes, you just need to accept what it means, without understanding them. But I hope that my description above explains the most common ones.

The most succint way to explain emoticons is that they are an expression of informal rating on a person's recent comments.

:) represents, as Omoe said, a informal expression of pleasure at something which has just been expressed.

Emoticons are just 'up-votes' and 'down-votes'. They have nothing to do with real emotions. There is a good reason that people prior to the advent of Internet 'talk' and 'chat' wrote real sentences.. their words cost something to put on paper. They were meaningful.

A modifier meaning that someone is happy or want to relieve.

A modifier that someone is sad or wants to say sorry.

A modifier saying that someone is joking or laughing, or to not take something serious.

Warning: sometimes it can mean that someone makes an ironic comment.

(I'm not sure if I get it right, since it's less common) - excited, surprised, astonished, flirting.

They announced the winners and, guess what, they read my name ^^.

Not the answer you're looking for? Browse other questions tagged autism communication aspergers or ask your own question.

19
How to classify and understand emotions of people using chat and text messaging lingo and emoticons?
28
Is the Neanderthal Theory of Autistic brain a reasonable scientific theory?
9
Is an autistic person's brain different from a non-autistic one?
0
Article about DTI of Autistic Brain
3
What is the evidence that mathematicians are more likely to have autistic traits than the rest of the population?
5
is it possible to be severely autistic yet not being "visibly autistic"?
4
Adept noticing of microexpressions by autistic people
3
Can an autistic person have very advance language skills?
4
In technologically advanced countries, do most autistic adults not know they are autistic?