What is the effect of Daylight Saving Time on attentiveness and productivity?

This weekend the clocks were set an our later (in some countries), such that the daylight lasts an hour longer in the evening. This has several reasons, among which a reduction in energy consumption and it is preferred by people who's work depends on daylight (wiki). Moreover, the clock will be more in sync with the natural sleep cycle which ought to improve well being (see figure).

However, because of Daylight Saving Time (DST), you do not only lose 1 hour of sleep that night, the entire day has shifted an hour. Subsequent nights, you'll thus likely experience that you go to bed an hour early.

Does this hour of missed sleep and shift in day affect your wakefulness and attentiveness (and overall productivity at work)?

The amount of sleep that people get affects people attentiveness and their productivity to a large extent, as discussed by Rosekind et al. (2015). When switching to DST, many people experience a loss of sleep (Barnes and Wagner, 2009) which can last up to a week and potentially longer (Harrison, 2013). This lack of sleep may explain the fact that more occupational accidents occur and productivity on the work floor drops (Barnes and Wagner, 2009; Coren, 1996).

Rosekind et al. (2010) did a research on the effect of sleep and productivity in a general sense. In their introduction, they described the following:

The prefrontal cortex is an especially important part of the brain for such functions as temporal memory and divergent thinking tasks (Harrison & Horne, 2000b), as well as control of emotional responses and attention (Johnson & Proctor, 2004). Consistent with this contention, empirical research indicates that sleep is an important determinant of alertness and attention deployment and control (Dijk, Duffy, & Czeisler, 1992; Flower et al., 2003; Jewett & Kronauer, 1999; Smith, McEvoy, & Gevins, 2002).

Following, in their study, they compared alertness and task performance of people (1) with good sleep, (2) who are at risk of losing sleep, (3) with insufficient sleep syndrome (ISS) and (4) who suffer insomnia. The results indicated that the people who sleep well always significantly outperformed the insomniacs. Effects of different sizes were found between the insomniac, at-risk and ISS group, depending on the measure.

With sleep loss, attention and productivity is thus negatively effected. But do people lose sleep because of DST? Harrison (2013) researched the effect of DST on sleep and related behaviors and, in his abstract, states that:

Relative ease in adjustment of sleep patterns is assumed by the general population but this review suggests that the scientific data challenge a popular understanding of the clock change periods. The start of daylight saving time in the spring is thought to lead to the relatively inconsequential loss of 1 h of sleep on the night of the transition, but data suggests that increased sleep fragmentation and sleep latency present a cumulative effect of sleep loss, at least across the following week, perhaps longer.

The negative effect is not limited to the shift of the clock in the spring:

The cumulative effect of five consecutive days of earlier rise times following the autumn change again suggests a net loss of sleep across the week. Indirect evidence of an increase in traffic accident rates, and change in health and regulatory behaviours which may be related to sleep disruption suggest that adjustment to daylight saving time is neither immediate nor without consequence.

Another study by Barnes and Wagner (2009) also showed that people slept shorter after DST and that there was an increased amount of accidents in the immediate Monday after, compared to before the switch to DST. No significant differences in amount of sleep or accidents were found after the autumn switch from DST to normal time.

The loss of sleep is not only a problem for productivity on the job. In a Canadian study (Coren, 1996), the amount of traffic incidents were investigated over several years around the switch to DST. Three Mondays were compared: 1 week before DST, Monday immediately after DST and the Monday 1 week later. Results shows that the amount of accidents significantly increased directly after the switch to DST, and a week later (although the effect size is smaller). 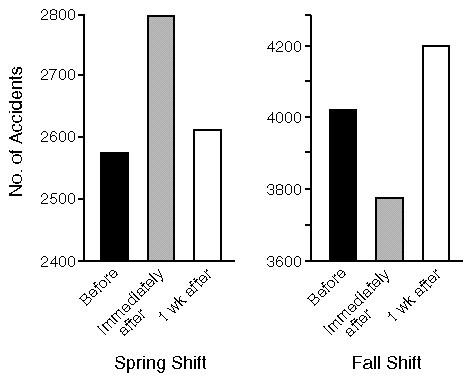 Not the answer you're looking for? Browse other questions tagged sleep attention human-factors health-psychology or ask your own question.

28
Can you catch up on sleep over the weekend?
3
Why does daylight-saving have such a big impact on us and weekends don't?

6
What is the mechanism explaining the effect of a positive attitude on immune system functioning?
13
What is the effect of mindfulness practice on cognition?
12
What defines the easiest time to get out of bed in the morning for humans?
6
Waking around the same time without an alarm
5
What is the scientific term for information overload?