According to materialism, the conscious mind is the product of the brain. Thus, if the brain is split in half such that the two hemispheres cannot communicate with each other, then there are three possibilities:

Within a materialistic paradigm, #3 is impossible. There cannot be unified control without communication between the two hemispheres.

Option #1 is false according to this article,

A new research study contradicts the established view that so-called split-brain patients have a split consciousness. Instead, the researchers behind the study, led by UvA psychologist Yair Pinto, have found strong evidence showing that despite being characterised by little to no communication between the right and left brain hemispheres, split brain does not cause two independent conscious perceivers in one brain. Their results are published in the latest edition of the journal Brain.

So I conclude from [sic] this quick literature review that Joseph ascribes the presence of two minds based on something that can be explained at a more basic level, and hence by a more simple model, namely disinhibited motor control. Given the principle of parsimony, I conclude his observations were right, but that his conclusions were not.

Option #2 is false according to this answer. The answer state consciousness does not transfer to one half, but continues to operate in both halves.

If by continuity you mean, "a feeling that I am who I was before the operation, (perhaps with some changes)", then it seems that each hemisphere would separately maintain continuity, in the same way patients after massive strokes and other sudden brain injuries don't usually feel "they are a different person".

Thus, only option #3 is viable according to the available data.

If option #3 is indeed the only possible explanation, yet is impossible according to materialism, then the materialistic explanation for the conscious mind is false.

A fourth possibility is there is an alternative communication pathway that is not severed, as hinted at by this answer.

Keep in mind that there are many other pathways between the hemispheres besides the Corpus Callosum - such as thalamocortical circuits, those via the midbrain and brainstem and of course external sensorimotor feedback.

Is option #3 the only viable option, or do the halves somehow communicate in a different way?

The simple answer being no, nothing disproves that - the brain harbors the mind e.g., (Lilienfeld & Arkowitz, 2008).

Now you mention that two hypotheses on split-brain patients are false, namely...

...and I agree with them being incorrect hypotheses as suggested in the linked pages.

Now you proceed with...

[Does a] single conscious mind operates across both [hemispheres ?]

Importantly, you state yourself that...

[...] there are [...] other pathways between the hemispheres besides the corpus callosum - such as thalamocortical circuits [...] and those via the midbrain and brainstem [...].

So from my perspective, up until now you have answered your own question whether one single mind operates across two hemispheres in split-brain patients. Anyway, to illustrate some additional interhemispheric commissures besides the callosal pathway, see Fig. 1. This shows that 'split-brains are in fact not entirely split; only the main causeway is severed.

Now there are wild stories about split-brain patients having a dual consciousness, including the paper by Joseph (1998) where the author speculates that one of his patients "...was possessed of two minds" based on the frustrations experienced by this person because his motor skills were erratic. Andrew & Akelaitis (1945) explain that split-brain patients can display diagnostic dyspraxia by an unbalanced inhibitory influence of the dominant hemisphere over the non-dominant side, explaining the uncoordinated behavior on the non-dominant side. These symptoms generally diminish over time, as the brain deploys alternative inter-hemispheric routing of communications. 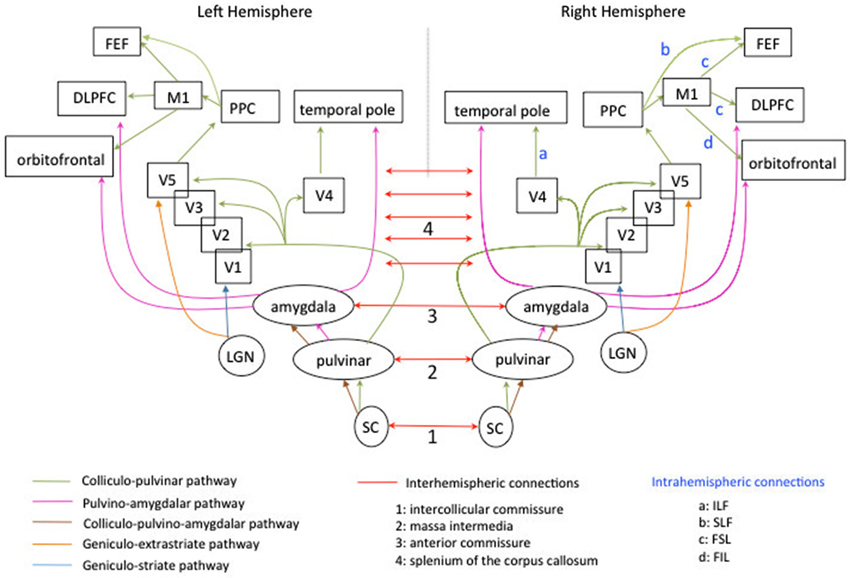 Not the answer you're looking for? Browse other questions tagged cognitive-modeling neurophysiology theory-of-mind brain pathology or ask your own question.

20
If someone becomes a split-brain patient, which side will "maintain" the continuity in their consciousness?
9
Is the split-brain, dual consciousness experiment from Rhawn Joseph valid?
8
Non-computational models of cognition

8
How does the mind build a model of reality?
3
What tasks is Spaun 2.0 able to perform?
6
Are there any significant alternatives to the theory that the mind exists?
1
Unilateral vision in split brain subjects
4
Integrated Information Theory - If correct could humans create artificial consciousness?
2
What does "The brain has its own language for testing the structure and consistency of the world." refer to?
3
Is there a way that an infection could target a specific area of the brain?
2
Does the mind create the body?