Why Is It That We Have Blindspots in Our Eyes?

We humans have an eye resolution of about $576$ megapixels, but just like how nothing is perfect, our eyes have blindspots where we can't sense any information.

In fact, you can find your blindspot by covering one eye, focusing on an object in front of you, set your thumb out in front and translate it until you can't see it.

What I mean for $2$ is that even though we have blindspots, we are still able to pick up information (put in simpler terms, why is our vision perfectly smooth instead of riddled with "dark" holes where we can't see anything).

This has baffled me for some time. Any ideas?

The blind spots are scotomas (areas of degenerated acuity) found in all mammalian eyes, and are due to the way the optic nerve crosses the retina (back of the eye):

Because there are no cells to detect light on the optic disc, the corresponding part of the field of vision is invisible. Some process in our brains interpolates the blind spot based on surrounding detail and information from the other eye, so we do not normally perceive the blind spot.

Scotomas can result from eye damage as well, and the result is the same:

There is no direct conscious awareness of visual scotomas. They are simply regions of reduced information within the visual field. Rather than recognizing an incomplete image, patients with scotomas report that things "disappear" on them.

As photoreceptor density in our eyes is not evenly distributed, and changes over time due to ageing and cell damage, the way our brain processes the visual field is probably an adaptation, so it is not useful to think of it as "pixelated":

In vision, filling-in phenomena are those responsible for the completion of missing information across the physiological blind spot, and across natural and artificial scotomata. There is also evidence for similar mechanisms of completion in normal visual analysis.

There are three main perspectives on how this happens in the brain. The first is "bottom-up" - called isomorphic filling-in - which is done by early visual systems using information from neighbouring areas. Think of this like the "magic healing brush" in Photoshop. The second is "top-down" - called symbolic filling-in - which is done by downstream areas of the brain filling in the missing parts with higher-level knowledge. The third is that filling-in is a fallacy called the homunculus argument, that is based on the false notion of a Cartesian theatre - that the visual system "projects" an image from the eye onto an observer inside our brain. However this does not make any sense, and so there is no reason to suppose that any kind of "filling-in" process actually needs to happen.

The reason we have a blind spot is basically because the retina is installed backwards. 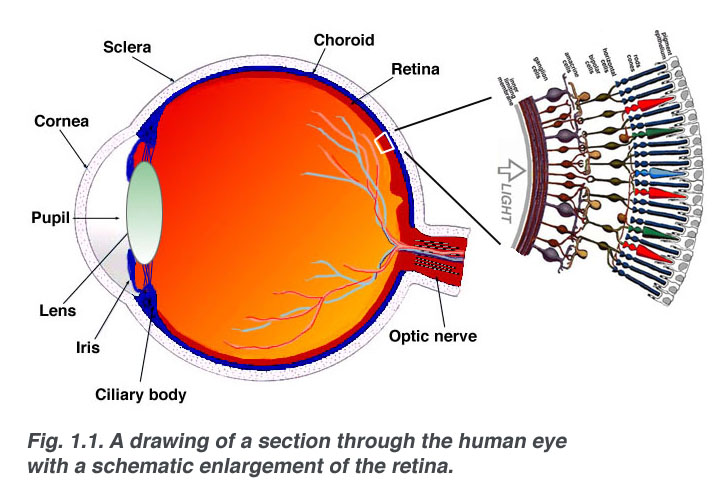 There is a layer of blood vessels, then a layer of long neurons that carry signals to the brain, then several layers of processing neurons, then the actual receptor cells that detect the light.

The reason we don't notice it is because our brains fill in missing information in our eyes. Even though we don't notice it, our eyes are constantly moving around. Our brain then combines what we see from various eye positions to fill in holes in what we can see and increase the perceived clarity of our vision. Further, we have two eyes, and the blind spot is in a different place in our visual field between the two eyes, so we can take what we see in one eye to fill in holes in the other. This isn't limited to the blind spot, diseases that cause a loss of vision like macular degeneration are also filled in. Whether this is somehow adaptive or is a side-effect of the processing that fills in the blind spot is not known.

It is thought that this is filling-in is done in the early visual cortex, where regions of the visual cortex that are active fill in areas nearby that aren't receiving any input.

We have a blind spot in each eye because there are no receptor cells where the optic nerve connects to the retina of the eye.

Rather or not we "sense" anything there can be difficult to answer. Technically, no information from receptors come from that area, but the brain does fill in information to provide a complete picture.

9
What does the visual feed from the retina look like before it is processed by the visual cortex?

4
Why do our senses evoke different subjective experiences
7
Do eyes accommodate to color?
5
Why do humans' eyes enter an unfocused gaze when recalling a memory or imagining something?
9
Why can we not see around our point of focus of our eyes?
4
When does anchoring improve our judgement?
5
Can our auditory perception be used to trick our visual perception?
4
Are there distinct visual perception themes that have been recognized in dreams?
0
Why do people have different opinions about an object when they are given different information about that object?
2
Is the effect related to shutting your eyes when a car is turning well known?