Persuasion strategies by Cialdini (why is punishment not there?)

Cialdini is famous for his book "Influence" where he talks about various ways to get people to do things you want them to. They are:

Should not punishment be included? Or are there soft/hard ways of persuasion, or perhaps short-term/long-term distinction?

I considered maybe punishment is part of authority, but do all forms of authority have additional power to punish? I don't think so. Some are just empty titles/positions. In addition, non-authority figures also have the power to punish, even if it's not legitimized, and as a result an abusive parent or child, or a bully or someone wielding a knife can punish you if you don't do what they say. In addition, the effects of or threat of punishment itself can also last a long time, like many other persuasion/influence strategies.

Briefly looking at an article summarizing Cialdini's viewpoints ("The Science and Practice of Persuasion", 2001, free pdf; doi link), he does not include threats of punishment under "authority". By "authority", Cialdini means the status of the influencer, such as being recognized as an expert on the subject-matter.

As far as I can tell, in his book, Cialdini barely tackles punishment directly. The most detailed passage dealing with punishment (as a strategy) seems to be one one child rearing, and even this occurs in a footnote:

The occurrence of the Romeo and Juliet effect should not be interpreted as a warning to parents to be always accepting of their teenagers’ romantic choices. New players at this delicate game are likely to err often and, consequently, would benefit from the direction of an adult with greater perspective and experience. In providing such direction, parents should recognize that teenagers, who see themselves as young adults, will not respond well to control attempts that are typical of parent-child relationships. Especially in the clearly adult arena of mating, adult tools of influence (preference and persuasion) will be more effective than traditional forms of parental control (prohibitions and punishments). Although the experience of the Montague and Capulet families is an extreme example, heavy-handed restrictions on a young romantic alliance may well turn it clandestine, torrid, and sad.

So he does include punishment at least under "parental control"... which I don't know where exactly it fits in Cialdini's ontology. Cialdini's book is very narrative with a lot of anecdotes, but he does not engage in a lot of systematization (beyond the chapter-level one which you've mentioned in your question). But from that passage he does seem to consider persuasion as not encompassing punishment. This is a fairly purist view, as I further detail below from the (review) perspective of other authors.

You are correct that other authors (in contrast) do consider punishment as form of persuasion, particularly in legal contexts. Quoting the SEP page on legal punishment:

However, an obvious and crucial question faces any such justification of punishment as a communicative enterprise. Censure can be communicated through a formal conviction in a criminal court; or it could be communicated by some further formal denunciation issued by a judge or some other representative of the legal community, or by a system of purely symbolic punishments which were burdensome only in virtue of their censorial meaning. It can, of course, also be communicated by ‘hard treatment’ punishments of the kinds imposed by our courts — by imprisonment, by compulsory community service, by fines and the like, which are burdensome independently of their censorial meaning (on ‘hard treatment’, see Feinberg 1970): but why should we choose such methods of communication, rather than methods that do not involve hard treatment (see Christie 1981: 98–105)? Is it because they will make the communication more effective (see Falls 1987; Primoratz 1989; Kleinig 1991)? But why is it so important to make the communication effective — and is there not a serious danger that the hard treatment will conceal, rather than highlight, the moral censure it should communicate (see Mathiesen 1990: 58–73)?

One sort of answer to this question explains penal hard treatment as an essential aspect of the enterprise of moral communication itself. Punishment, on this view, should aim not merely to communicate censure to the offender, but to persuade the offender to recognise and repent the wrong he has done, and so to recognise the need to reform himself and his future conduct, and to make apologetic reparation to those whom he wronged. His punishment then constitutes a kind of secular penance that he is required to undergo for his crime: its hard treatment aspects, the burden it imposes on him, should serve both to assist the process of repentance and reform, by focusing his attention on his crime and its implications, and as a way of making the apologetic reparation that he owes (see Duff 2001, 2011; see also Garvey 1999, 2003; Tudor 2001; Bennett 2008; for a sophisticated discussion see Tasioulas 2006). This type of account faces serious objections (see Bickenbach 1988; Ten 1990; von Hirsch 1999; Bagaric and Amarasekara 2000; von Hirsch and Ashworth 2005, ch. 7): in particular that it cannot show penal hard treatment to be a necessary aspect of a communicative enterprise which is still to respect offenders as responsible and rational agents who must be left free to remain unpersuaded; that apologetic reparation must be voluntary if it is to be of any real value; and that a liberal state should not take this kind of intrusive interest in its citizens’ moral characters.

From that I gather that it is controversial whether punishment can be considered true persuasion though, i.e. some other authors disagree.

I suspect that in psychological terms, those who argue for punishment as persuasion are behaviorists, in that they don't care what's going on in the mind of the punished as long as the desired outcome (e.g. non reoffending) happens. On the other hand, cognitivists would probably argue that if the outcome does not also include the target internalizing/adopting the viewpoint (that is being communicated) then it is not actual persuasion, but mere compliance-- a sort of machiavellian behavior basically. An exam flashcard says:

What is the difference between persuasion and compliance gaining?

Persuasion is a change in attitudes, beliefs and values whereas compliance gaining is focused on changing behavior, getting someone to do what you want.

That's probably based on some intro 101 book. The research monograph by Seiter and Gass (Perspectives on Persuasion) has a three-page table with definitions of persuasion by various authors... and they don't really agree. Seiter and Gass have their own view (of course):

Our position is that many of the definitional vagaries can be clarified, if not resolved. by focusing on two considerations. The first is whether a given scholar or researcher is attempting to define "pure" persuasion- what Simons (1986) and O'Keefe (1990) have labeled "paradigm" cases of persuasion-versus all of persuasion, including its periphery. which we term "borderline" cases of persuasion, By pure persuasion. we refer to clear-cut cases on which almost all scholars in communication and related disciplines would agree. As examples. nearly everyone would include a presidential debate, a television commercial. or an attorney's closing remarks to a jury as instances of persuasion. Other instances. though, lie closer to the boundary of what we normally think of as persuasion. Not everyone would agree that a derelict's mere appearance "persuades" passersby to keep their distance. Nor would everyone agree that when city planners install speed bumps on a street where speeding is common. they are "persuading" motorists to slow down. Such cases are less clear-cut. Much of the disparity in definitions. then. is rooted in the fact that some scholars and researchers are concerned with "pure" persuasion. whereas others are concerned with borderline cases as well.

Comparing this summary with the passage from Cialdini's book I cited in the beginning, it seems clear enough to me Cialdini was/is preferring (or at least implicitly using) a "pure" definition of persuasion.

Seiter and Gass also have a textbook (with a similar title but less research oriented), which repeats their view form their monographs, augmented with a pretty illustration (well, the illustration is present in the monograph as well): 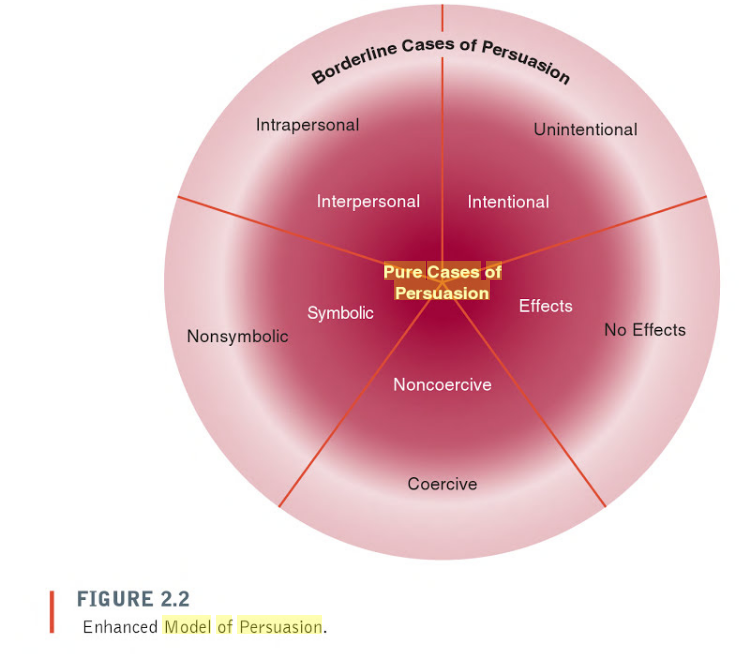 As you can see the "coercive" form of persuasion, which would include punishment (or at least the threat thereof) is in the borderline bin/area. And in the textbook they further drive that point with a cartoon: 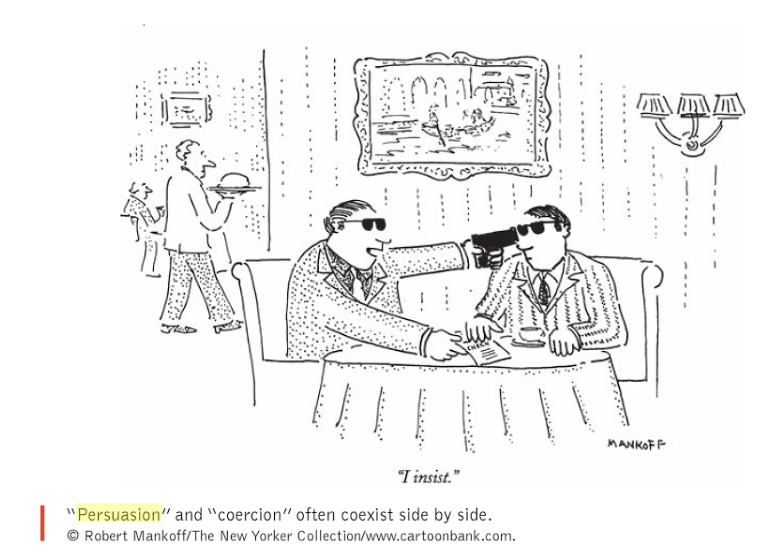 accompanied by an elaboration that coercion and persuasion lie on a continuum, and that pure forms are rarely encountered in everyday life experiences:

we would suggest that most influence attempts we encounter in daily life include both persuasive and coercive elements. Rarely in life is one free to make a a completely unfettered choice. There are almost always strings attached. This is particularly true of face-to-face encounters. If a friend asks to borrow 20 bucks, we can say "no," but there may be relational consequences for declining.

Rarely, too, are influence attempts completely coercive. For example, holding a gun to another person's head would seem to be an obvious example of coercion. We readily admit that this situation is primarily coercive. But what if the victim doesn't believe the gun is loaded? Or what if the victim thinks the threatener is bluffing? To be successful, a thread--even a threat of violence--must be perceived as credible. Thus, even in what might see like a clear-cut case of coercion there are persuasive elements at work. And conversely, even in what appear to be cut-and-dried cases of persuasion, there may be coercive features operating. In out view, the isn't so much whether a situation is persuasive or coercive as how persuasive or coercive the situation is. [emphasis in original].

Not the answer you're looking for? Browse other questions tagged social-psychology persuasion or ask your own question.

4
Is it usually worthwhile to argue to try to convince someone?

4
The psychology of humility. Why do we not value our efforts?
8
How is history of psychology taught around the world, and if it is not, why not?
7
'Always Give a Reason Why' - How to describe this subject area?
3
Are there cultures in which leadership/hierarchy does not exist?
8
Why some people do not perform well with ambiguity and uncertainty?
0
How is hypnosis not mind control?