Nice and quick and simple, there are a few ideas on how people go through the process of bereavement, grief and loss, such as Kübler-Ross' five stage model of grief so I am wondering what makes them diferent and what idea is a best representation?

Take for example, a hospital surgeon fighting to save the life of someone on their operating table. They know that their life can be saved but complications arise which result in their death. Also for another example, a train driver strikes and kills a person on the line. There can be feelings of guilt and anger with themselves as well as grief, and in the case of the train driver, there can be anger felt towards the dead person, especially if the situation was a suicide. Whilst working on the railway I have heard comments such as “Suicide is selfish”, “They don’t think about the poor driver”, and “Now the driver is having to live on sick pay whilst he is dealing with the death in his head”.

Grief can also affect a large population of people with the death of some people, for example the death of Princess Diana in 1997 and Robin Williams in 2014 (Connor, 2014)

Bereavement, loss and grief can also be evident as a result of the loss of a job, sudden loss of physical or mental abilities, loss of material things, or loss of relationships through separation, divorce or death. Catherine Jackson commented in the editorial at the front of March 2016 edition of BACPs journal ‘Therapy Today’ that,

Dementia is often seen as stealing the person and leaving only a body behind.

With death, someone who has religious and/or spiritual beliefs may believe in an after-life of varying kinds, which can add a different dimension to the therapeutic work needed as these beliefs can create different outlooks on death in all sorts of ways.

William Worden was different because he only covered the tasks involved with dealing with grief following death, however, this can be used whilst dealing with other forms of grief, and the following table I put together shows how the representations combine and overlap each other. 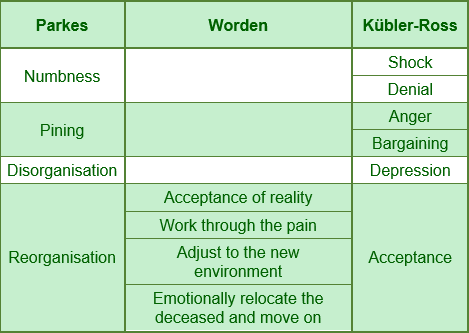 20
How long can a person stay happy, excited and motivated about something new?
7
Is there a term to describe an inability to express emotion or feelings?
2
Terminology for deep-seated feelings?
2
How does look, tone and voice manipulate behavior
3
Is there a standardised test about emotion perception?
2
What is the basis of the belief that modern psychology demonstrates that words themselves can be hurtful and verbal aggression should be wed out?