After how much time should we review a particular study material after once studying it thoroughly so as to retain it longer?

I am having some doubts regarding my study regime; I am wondering if psychology could help?

So,I studied this one chapter thoroughly and due to shortage of time, I didn't review it for another 2-3 weeks. When I sat down to solve the related problems after 2-3 weeks, I didn't have that confidence anymore and I faced difficulty in attempting the problems that I was very comfortable with 2-3 weeks ago.This happened many times and it is spoiling all my hard work and is affecting my grades.

I know that it is always easier to learn a material second time than it is to learn for the very first time. It is because every bit of that information is somewhere stored in our subconscious memory. But, still how much time it should take for me to gain the same amount of confidence about that chapter as I had a couple of weeks ago?

Memory is a complex phenomenon with a number of variables for which we don't have yet the whole picture, let alone specific recommendations, a lot of research is also disputed since we tend to be different from human to human, perhaps that is why it hasn't been used in academia,i.e. we don't teach how to learn. Having said that here's a brief overview of your situation.

The first step is information encoding, a number of variables are at play here, but in short: "The retention of briefly presented information depends on past experience,context, and it's perceived importance"1, very little information is new ( you are not re-learning the periodic table every time you are presented with a new molecule), rather you are learning a new association and your physical situation (like where you are, distractions, motivation,emotional state, stress levels) influence the process.

The second step is information consolidation, that is transferring your newly formed associations from a short term memory to a longer term storage, a continual process. Any new conflicting information will negatively impact this first short( day to day) to medium (weeks) bridge.Sleep: (non REM,slow wave or even naps) after information encoding seem to be both critical and helpful at this stage, diet,stress levels and lack of sleep work against this process.2

Caveat emptor: A quirk of human memory, specially during early consolidation, is that retrieval ( or rehearsal ) alters the state of previously stored information, so an incorrect rehearsal session has the probability of affecting you previously well formed memories.3

Beyond that and previously mentioned variables, the consensus seems to be:

Memory in general stabilizes 3 to 5 years after the acquisition period3.2 ( so as many times as possible during that time based on the above recommendations seems reasonable) with the emphasis that (another memory quirk) in a process similar to how it is originally stored and rehearsed for consolidation, it becomes easier to recall something as you try to retrieve it.5

Depends on the aforementioned initial encoding and subsequent stabilization plus the particular study material, ( is it a list of elements, a concept, a multi step process).In general memory tasks with unique multivariate associations (mnemonic devices for instance) fare better than less complex or even similar/competing memories. So each particular study material is expected to have a different forgetting curve in specific circumstances. Ebbinghaus forgetting curve which skirts these issues and a lot of newer research non the less can still be considered a good general estimate and starting point for how memory fades: 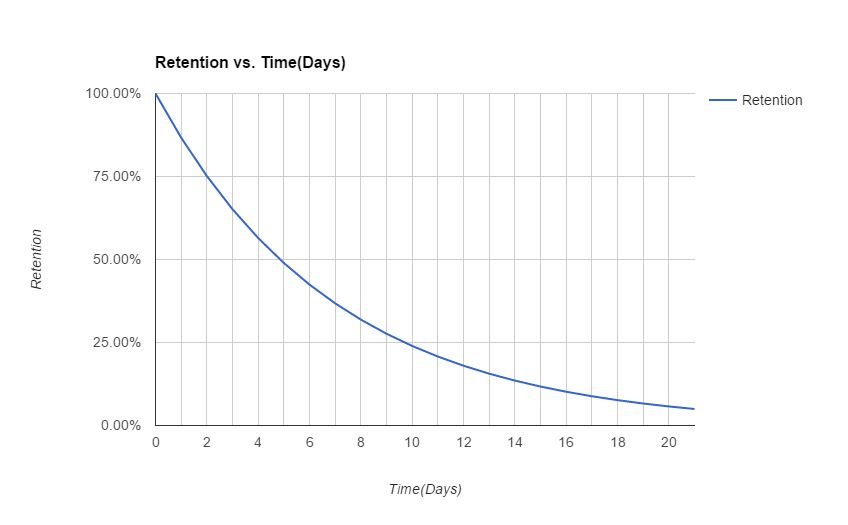 The plot is exponential, which means that the initial conditions greatly influence future retention rates, ( I've used a mix of subjects/conditions for an average), But as mentioned your starting point and specific situation can greatly influence memory strength (your exponent over time ), so under bad learning conditions, no interest on the subject and a very hard to discern subject matter, your curve would look like this: 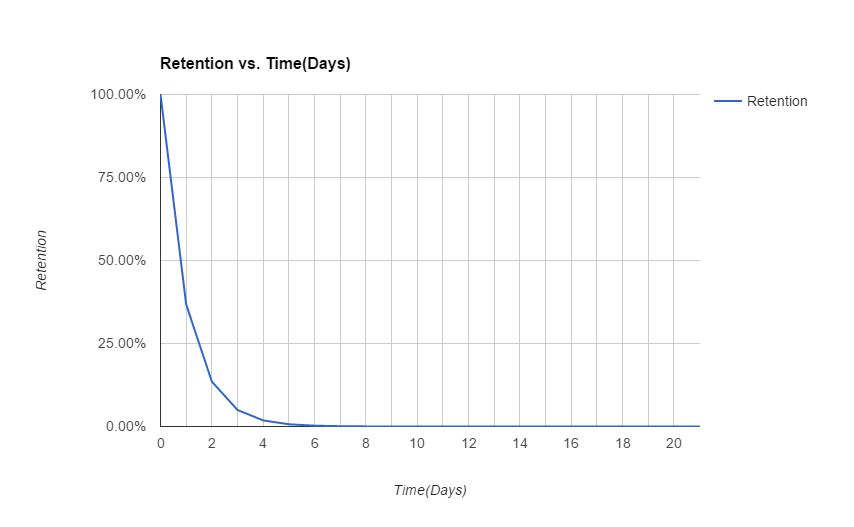 I am leaving aside flashbulb memories (aliens landed during your study session !, good luck thinking about anything but aliens for the next 3 weeks!), which are a separate topic and do not seem to obey normal memory consolidation rules.

As mentioned the initial conditions are critical and influence the process, there is a period of consolidation (more variables) which further influences consolidation and then one of relative stability, this period in a general simplified way looks this: 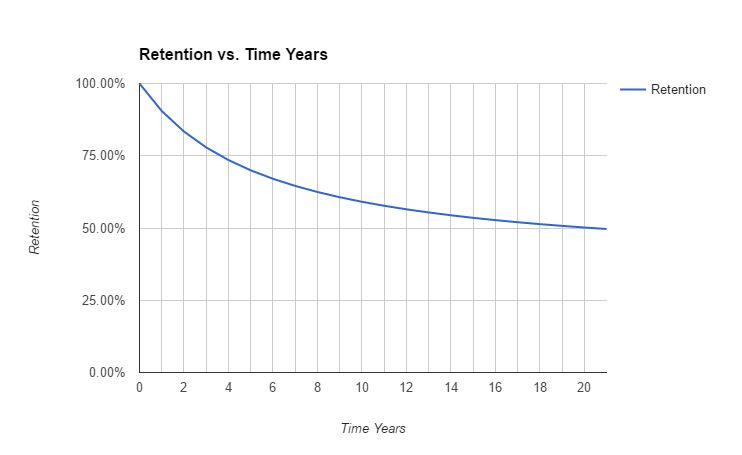 So you get a nice long sub exponential tail thanks to long term consolidation.

Just a quick note before wrapping up, in general people are overconfident, specially at the high end when it comes to memory retrieval 3.3.

how much time it should take for me to gain the same amount of confidence about that chapter as I had a couple of weeks ago?

Due to all the above variables, it is hard to give you a definitive answer, beyond the obvious one that 2-3 weeks under your initial learning conditions are inadequate and you will have to relearn (albeit you will be doing it a slightly faster rate), there are a number of strategies for sequential learning that pair our basic understanding of memory into a studying regime, here is one such strategy: 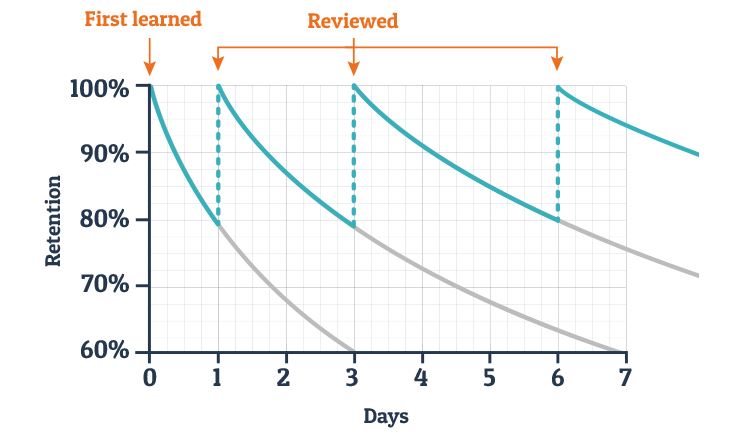 This is an oversimplification, in order for you to answer your own question, you need to standardize your learning environment and subject matter in as much as possible (don't forget to adjust for overconfidence), come up with your own decay rate and then plan your studying regime based on your learning curves which would need to be updated as you relearn and specialize, sounds like a lot, but it's basically jotting down a couple of numbers and perhaps the hardest part making sure you have the correct learning environment.

Finally, I haven't talked about learning aids, the effect of mnemonics as well as other strategies is well researched and I believe can be beneficial to anybody,specifically students, but I believe it should be used as a sort of extra boost rather than a foundation for learning. (i.e. An understanding of the material should come first) Use at your own risk.6

The overarching note is that memory research stands in stark contrast to most academic programs and learning environments, practices and popular myths.

2. The Secret World of Sleep (Lewis).

3. The Oxford Handbook of Memory(Tulving,Craik) 3.2 Strictly speaking there are a number of other variables that influence memory stability, a high emotional context for instance seems to solidify them earlier. 3.3 Not trivial either and something like 20% of errors can be observed in high confidence reporting.

4. You still have the benefit of the priming effect and other temporal benefits, so it's not all wasted, you can catch up faster.

5. What is sometimes called Spontaneous recovery.

6. Your Memory: How it works and how to improve it (Higbee) has a lot of useful advice aimed mostly at students.

Not the answer you're looking for? Browse other questions tagged brain-training or ask your own question.

15
What is the optimal repetition pattern to maximize long term memory?