Why do western people's orientation/navigation differ from non-western cultures? 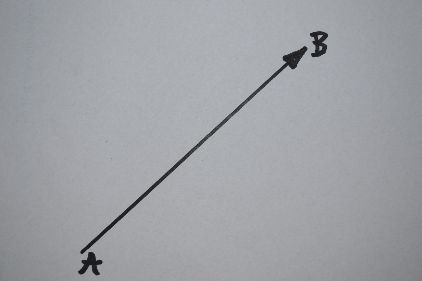 We show western orientated people the picture above: A line which represents a trip from A to B.

Then we ask them to turn 90 degrees to the right and look at the image below: 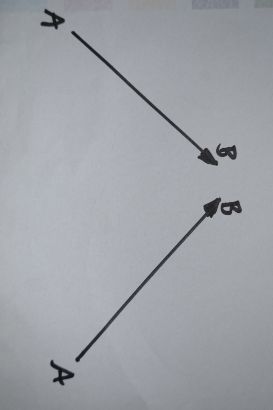 Most people who think in the western way (whatever that may be, but I think you know what I mean) answer to the question which of the two trips from A to B corresponds to the trip above that it's the upper line from A to B. In other words, they see as if the map has turned 90 degrees as well.

The same question was asked to people from non-western cultures (Hopi-people, Aboriginal people, Native Americans, you name it). They (almost) all said that the lower picture was correct. Instead of the entire map that turned, they perceived as if only they (or the letters) turned by 90 degrees.

Like Dennis Cousineau commented below, western people use maps and the north is always on top of our maps. Non-western cultures who don't use maps (like the Native Americans or the Hopi) arrive at the right answer maybe because they don't associate, while looking at maps, the north with the upper part of the picture. They directly put the second line piece in the second picture on the line piece of the first picture.

What could explain this difference in orientation?

This is a classic example of the analytic vs holistic perceptual systems, one of the cornerstone theories on cross-cultural cognition. For a good overview of this see Perceiving an Object and Its Context in Different Cultures by Kitayama et al. (2003) or you can start with the seminal piece Culture and the self by Markus & Kitayama (1991).

Essentially, due to differing cultural norms certain groups of people tend to favour a more holistic or analytic attentional style. The former puts equal or greater emphasis on contextual features/factors, while the latter emphasises specific or unique characteristics.

I.t.o. the current question, a holistic perceptual style is better able to take into account the contextual factor (rotation) when making decisions, while a analytic style does not and so can cause errors in judgement.

Not the answer you're looking for? Browse other questions tagged perception cross-cultural-psychology spatial-cognition or ask your own question.

4
Is there evidence for cross-cultural differences in problem solving skills?

12
Simulate colorblindness in non-colorblind individuals
9
How do responses to Likert type response scales vary across countries and cultures?
16
Do cultures differ in the perception of emotions from body expression?
4
Why are some people attracted to people of other races?
2
How image orientation influences perception
5
Do non-human primates exhibit the Kiki/Bouba effect?
0
Why is cultural understanding often wrong?