Electrodermal activity (EDA) is a measure of the sympathetic activity, typically caused by stress or an emotional state. Analysis not a straightforward process like analysing reaction times. It requires some sophisticated algorithms to distinguish tonic activity (Galvanic Skin Level; GSL) and phasic activity (Galvanic Skin Responses; GSRs; see Figure 5). For a more elaborate explanation of EDA and how to analyze it, please see Bouscein (2012). 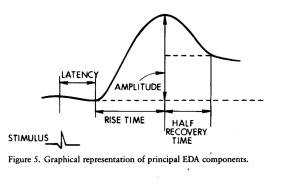 BioPac (Braithwaite, 2013) and Movisens provide software toolboxes for analyzing this data, but these are costly packages. Ledalab and PsPM are open-source Matlab toolboxes that are also able to pre-process and quantify GSL and GSRs. Unfortunately, Matlab itself is not open-source and quite expensive. Are there other free solutions that allow you to analyse EDA data, such as Python or R packages?

I have found a list of Python and Matlab packages. I'll summarize them over here. As soon as I have gone through the packages, I'll provide some additional details.

Most packages came from http://affect.media.mit.edu/software.php. The website provides tools for analyzing several other stuff, such as facial recognition. Definitely worth taking a look.

Not the answer you're looking for? Browse other questions tagged emotion methodology software data workload or ask your own question.

1
How to work with EDA data in R environment?
6
How to measure galvanic skin response with wearables?
4
How to look for correlations between heart rate and eda
3
What is a good software/hardware combination for biofeedback monitoring that includes GSR, GSM, HRV, and EEG?
3
Does anyone have R code for analyzing skin conductance data?
2
EDA explorer - artifact detection vs artifact correction

29
Open source software for running Internet psychological experiments that collect reaction time data
16
Software for online psychological experiments that don't require users to download anything
8
Analyzing control questions data for a survey
4
Research software for conducting a task between card sorting and sketch map drawing
3
What speech synthesis software is suitable for research?
3
Open source software for analyzing Heart Rate Variability (HRV)
1
What software to use for psychology questionnaire?
2
Open data for behavioral psychology experiment?
3
Source of data for US suicides (by month or quarter) 2019 vs. 2020