Are there neural loops within a column or an area of the cortex? 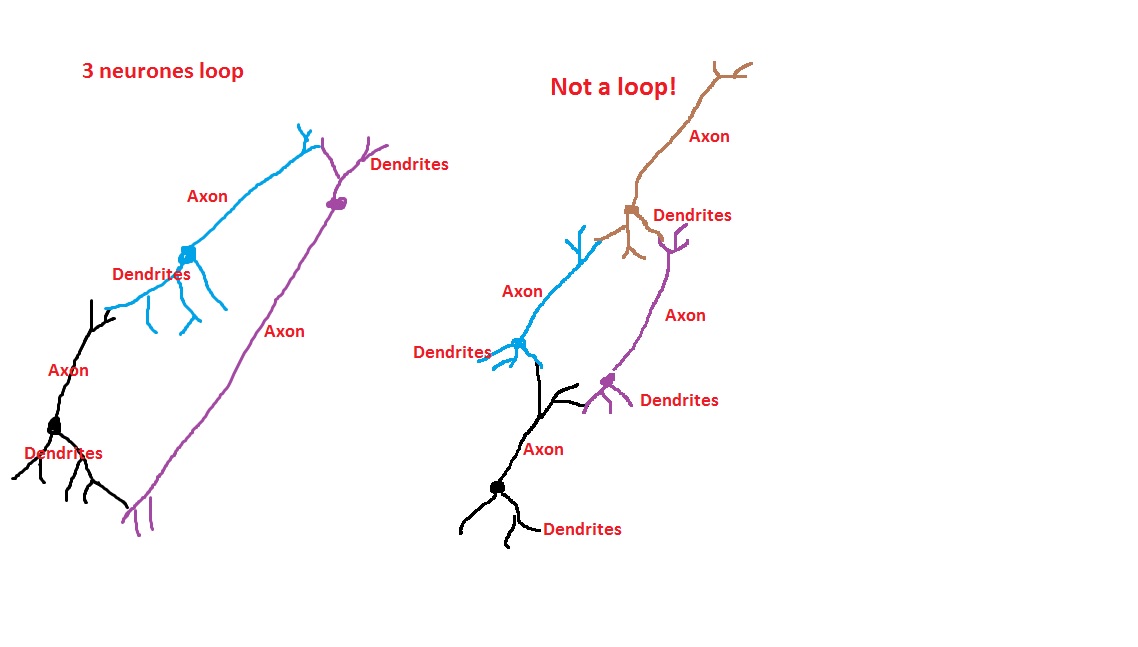 Neuronal networks can make loops because a neuron has a direction (from dendrite to axon).

What's the smallest area in the cortex where we can find a loop and what are these loops?

I understand there are loops between different cortical areas through the white matter.

Experiments, like this one, show there are interactions between cortical layers. But it doesn't necessary mean there are loops.

Other experiments, like this one, looking at signals propagation in pieces of cortex with a cut showed the propagation could somehow circumvent the cut and keep propagating. Again it shows the existence of some local circuits but not necessarily loops.

Do we have a proof of local loops in the cortex? How large a piece of cortex has to be to contain a loop? What are these loops?

I've read evidence for single-neuron, two-neuron, and larger loops/cycles throughout the cortex, including intralaminar, interlaminar, and interareal neural loops. But it would take me far too long to back that statement up.

Instead, I offer a list of papers to get you started. I've read all these papers, and they all provide evidence for neural loops in the cortex, especially two-neuron loops. Within these papers, search for "loop", "reciprocal", and, if you're interested in single-neuron loops, "autapse".

Yes, absolutely there are loops, and they can occur on a very small spatial scale.

Do we have a proof of local loops in the cortex?

Here are a few papers that describe experimental quantification of small networks (2+ neurons) with recurrent connections in various patterns:

How large a piece of cortex has to be to contain a loop?

Judging from the experimental evidence I cited, loops of connections can occur on the scale of neighbouring neurons. That means, the smallest piece of cortex that contains a few neurons can contain a loop.

What are these loops?

I'm not sure what you're getting at here; if you are asking why there are loops, then we can only speculate. But even if connections were made randomly, loops would exist. A better question is why are there more bidirectional / motif connections than we expect by chance?

Scholarpedia has an article on them, with a bibliography:

Typically... reviews consider RNNs that are artificial neural networks (aRNN) useful in technological applications. To complement these contributions, the present summary focuses on biological recurrent neural networks (bRNN) that are found in the brain. Since feedback is ubiquitous in the brain, this task, in full generality, could include most of the brain's dynamics. The current review divides bRNNS into those in which feedback signals occur in neurons within a single processing layer, which occurs in networks for such diverse functional roles as storing spatial patterns in short-term memory, winner-take-all decision making, contrast enhancement and normalization, hill climbing, oscillations of multiple types (synchronous, traveling waves, chaotic), storing temporal sequences of events in working memory, and serial learning of lists; and those in which feedback signals occur between multiple processing layers, such as occurs when bottom-up adaptive filters activate learned recognition categories and top-down learned expectations focus attention on expected patterns of critical features and thereby modulate both types of learning.

At least in this article (i just skimmed it) it looks like most of the presumed biological neural networks are inferred to exist from models, rather than having actually been found with a microscope.

1
Are cycles possible in circuits of neurons?

19
Is there a region of cortex which over a period of development becomes the seat of self?
16
What are the key examples of the use of computational methods in the study of biological neural networks?
6
Does each sensory neuron type have a characteristic spike sequence pattern?
10
Fusiform Face Area (FFA) for within class recognition?
5
What sources of randomness does the brain use for sampling?
3
Understanding the 'Wiring Catastrophe'
0
Are neurons the wrong shape to model neural networks?