Is the Rubin Vase illusion an example of inattentional blindness?

Generally, people looking at an example of a Rubin Vase see either the vase, or the faces. The brain seems to make a decision on which one is being viewed, but both cannot be focused-on at the same time.

Is the Rubin vase a form of inattentional blindness, caused by the same brain function that only allows us to focus on certain objects in our field-of-view, but not others? The Gorilla-in-the-Room is another example.

Short answer
The Rubin Vase is a visual illusion, which can be traced down to the way the visual system analyzes visual scenes in terms of objects and background. Inattentional blindness is not an illusion, it is the failure to detect stimuli when the mind is focused on something else. It has to do with the limitations in the capacity of the visual system to extract relevant information from a visual scene. 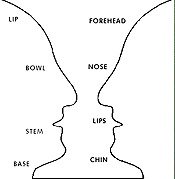 The visual system represents objects primarily in terms of their contours. Also, elements that are close together, or share certain features, or are homogeneous in certain respects tend to be grouped together (grouping). The sudden reversal one may perceive is thought to be due to a shift of attention on the shape of the contour. The observer's "perceptual set" and individual interests can also bias the situation. Biasing the shapes or contours can make one interpretation stronger than the other one. This particular illusion involves higher cortical processing, because previously stored information about vases and faces are resourced (source: TU Dresden). 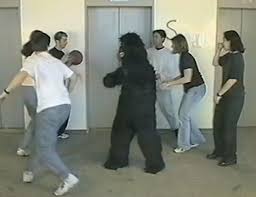 The failure to notice unexpected objects or events when attention is focused elsewhere [...] (source: Simons).

Not the answer you're looking for? Browse other questions tagged cognitive-psychology neuroscience perception vision optical-illusion or ask your own question.

5
Is there any evidence for a bias towards perceiving darker surfaces as 'figure' rather than 'ground'?

6
What does daytime actigraphy reveal about an active and awake brain?
7
Is there any science behind movie/commercial camera angle changes?
6
Does the structure of consciousness mimic that of the visual process?
10
What's the explanation of this optical illusion where many coloured arcs radiate from a central point?
4
Due to Gestalt Psychology, is the face an illusion?
1
Why do we see shadows in the following black-and-white optical illusion?
5
Are scintillating scotomas really caused by cortical spreading depression? If so, how is this known to be true?
3
Is the Thatcher Face Illusion only limited to face recognition?