What is the difference between noise reduction and noise cancellation?

I had a question about sirens in another section which led to a question in physics section...and I was told my question is more suitable for cognitive science. So here it goes:

There are many kinds of noises: from a heavy truck going by to the wailing of sirens from an ambulance. Then there is someone next to you snoring. Although they are all bothersome, they can't be the exact same thing?

I've heard people use the term "white noise" to cancel out or reduce other noise. Granted I have used various earplugs (which reduce only reduce certain kinds of noise and not that well either), but looking at white noise, I realized there is so much about noise and sounds that I don't know about. For instance there is also brown noise and pink noise. There is a sound's loudness, pitch, timber, direction, frequency, etc.

How do I go about finding the right kind of sound masking for different kinds of sounds like snoring and wailing ambulances?

Let's start with the terminologies in your question:

Loudness: The level (amplitude) of the sound. The higher the sound level, the louder it is perceived. Loudness is measured on a dB scale, e.g. dBA (corrected for the human sensitivity across frequencies), dB HL (used in the clinic relative to normal-hearing level) or dB SPL (a more physical approach to sound level). In Figure 1 below an impression is given in dBA (A-weighted sound levels). Don't worry about dB scalings too much. Generally spoken, normal speech is around 65 dB, background noise around 30 dB and the pain threshold around 130 dB (source: OSHA). 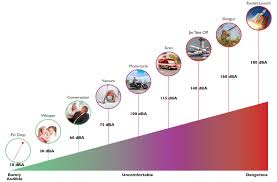 Frequency: A perfect sine wave has a single frequency. This corresponds to a pure tone. Most normally occurring sounds have multiple frequencies. Frequency determines pitch.

Pitch: Basically determined by the frequency of the sound. The audible frequency range of humans ranges from approximately 20 Hz to 20 kHz (source: LSU). The subjective perception of frequency is called pitch.

Timber: no, no, timber has something to do with wood - it's timbre. Timbre represents 'those subjective qualities of [sounds] not determined by [their] pitch our loudness. It is determined by the frequency spectrum and envelope (envelope is the slow, low-frequency part of the sound that envelopes it) (source: wiki). In terms of sound attenuation/masking/cancellation, it is of not much interest. Likely the timbre can influence the nuisance factor of a sound, but not more.

Direction: acoustically generally defined as azimuth (degrees in horizontal plane) and elevation (degrees in the vertical plane). Also here, in terms of sound attenuation/masking/cancellation, it is of not much interest

White noise: A random signal with a constant power spectral density. It is a discrete signal whose samples are regarded as a sequence of serially uncorrelated random variables with zero mean and finite variance. One may also require that the samples be independent and have the same probability distribution. If each sample has a normal distribution with zero mean, the signal is said to be Gaussian white noise (source: wiki). Subjectively, white noise has a sharp, rather unpleasant hissing quality to it. Check it out at Online Tone Generator.

Pink noise: Pink noise or 1⁄f noise is a signal or process with a frequency spectrum such that the power spectral density [...] is inversely proportional to the frequency of the signal. [E]ach octave [...] carries an equal amount of noise energy. The name arises from the pink appearance of visible light with this power spectrum (source: wiki). Pink noise has much higher low-frequency contribution than white noise, and is therefore more pleasant to the ear. It approaches the sound of rainfall, or that of a waterfall. Pink noise is a better choice when you wish to go to sleep, as it is often experienced as relaxing. Check it out at Online Tone Generator

Brown noise doesn't exist, as far as I know. Brownian noise is what you are after. Brownian noise, or red noise, is the kind of signal noise produced by Brownian motion, hence its alternative name of random walk noise. The term "Brownian noise" comes not from the color, but after Robert Brown, the discoverer of Brownian motion. The term "red noise" comes from the "white noise"/"white light" analogy; red noise is strong in longer wavelengths, similar to the red end of the visible spectrum (source: wiki). It is a much less commonly encountered noise. Check it out at Online Tone Generator

On to your question:

There's basically three things you can do to get rid of pesky sounds:

I'm not sure but you what you might want to learn is phase cancellation. Sound is a wave, the compression and dilatation of the air between the source of noise and your ears. If you add another sound, where the waves are exactly the opposite of the first one, they will both disappear. Some headphones use this technique to reduce the sound. They detect the sound around you and cancel it by creating an opposite sound.

Two dimensional diagram are usually used to represent the vibration. Your ear doesn't hear all the sounds. You can add several sounds together. They will be mixed and this will change the way you hear it.

Not the answer you're looking for? Browse other questions tagged hearing psychoacoustics or ask your own question.

6
What delay between two audio sources is seen as "noticeable" to most people?
7
Which is the shortest duration for a pitch difference in audio signals to be perceived by the human auditory system?
8
Is there a difference between hearing and decoding the sound?
2
What is the effect of gradual increase of speech speed on speech comprehension?
5
Any link between IQ and a person's ability to create or mimic sounds?
7
Increasing pitch perception of the same auditory stimuli
1
What is the maximum time difference to still associate an acoustic and visual event?
5
What are the temporal limits of the auditory system?