Many questions were asked about general procedures of Electroencephalography (EEG), which were phrased in a rather specific context. Not only were these questions hard to find, they might also be difficult to generalize for novices. This was discussed in this meta-post. Providing a more generalized context could make the information more accessible. Therefore:

What is the physiology behind EEG measurements and how is this recorded?

EEG research all started with Hans Berger, who in 1929 reported that brain activity could be recorded by measuring electrical activity on the scalp. Although the notion of ‘brain waves’ that were found by Berger was controversial, over the years many researchers replicated the results, which led to the acceptance of EEG as a real phenomenon.

Neurons
Before going into all the different ways of analyzing EEG data, let us first try to understand the brain and how brain activity is generated. Let us therefore look at one of the smallest units in the brain: the neuron. Each neuron has a resting potential of 75 millivolts, meaning that the there is a difference in electrical potential of 75 millivolts between the inside of the cell and the outside. This resting potential is maintained by the Sodium-Potassium pump, by ensuring that there is a high concentration of sodium (Na+) outside of the cell, and a high concentration of potassium (K+) inside the cell.

The neuron can be stimulated by an external electrical potential, which will cause the permeability of the cell wall to change. The Na+ and K+ ions are then temporarily free to move through the cell wall, such that the concentration of Na+ and K+ will be the same both inside and outside of the cell. Accompanied with this free flow is a huge increase in voltage, which is also referred to as an action potential. This action potential will be propagated through the axon to the synapses, which will release neurotransmitters outside of the cell. These neurotransmitters will, in turn, attach to a receptor site at the dendrites of a new neuron, thereby changing the permeability of that neuron. Again, charged ions will flow into that cell, which will result in post-synaptic potential. This potential can be either inhibitory or excitatory. Thousands of synapses can be related to one dendrite. When enough excitatory post-synaptic potentials (EPSPs) occur simultaneously from these synapses, a new action potential can occur in the new neuron.

Electrical fields
The influx of ions at the dendritic side of a neuron, as the result of an EPSP, will result in a negatively charged extra-cellular space, relative to the axon-side of the neuron. This is especially interesting for a pyramidal cell, where the axons and dendrites are clearly separated (See Figure 1; left). Because of this orientation, a dipole will come to exist. A dipole is when a positively charged area is close to a negatively charged area which creates an electrical field: a space surrounding an ion in which force is exerted on other ions (See Figure 1; right). “When a large number of small dipoles, such as those generated by activity in a pyramidal cell, are summed together, the resulting electrical potential can be described as a single, larger dipole referred to as an ‘equivalent current dipole’ (ECD). The ECD has an orientation equal to the average of the orientations of the smaller dipoles” (Dickter and Kieffaber, 2014). 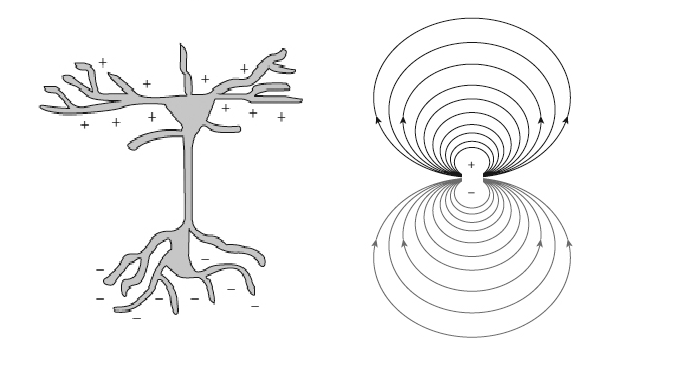 The extent to which the electrical fields are summed, depends on the spatial and temporal contiguity of the pyramidal cells. Neurons that are closer together will have a higher summation than two neurons that are far apart. Although the human body is full of fluids and electrical flow can be conducted throughout it, the effect will diminish when the distance increases.

So now we know where the signal comes from. But how is it recorded? Well, an EEG cap contains electrodes, which are “connected” to the scalp by use of a conductive gel. This gel contains free ions that are able to move freely which, therefore, allows the gel to conduct the biological signal. The signal is then conducted to the metallic electrode through “redox (oxidation-reduction) reactions”, which is the interchange of electrodes between the gel and the metal of the electrodes. When considering Silver-Chloride (AgCl) electrodes, Cl- ions can be removed from the silver and, conversely, Cl- can be bound to free Ag+ ions, thereby creating the compound AgCl. This changes in the metal will then be conducted through the cable to the systems.

Analog Digital Conversion
At this moment, the signal is still analog, that is, a natural occurring signal that can have any natural value. The computer however, is nog capable of measuring analog values. Instead, the analog signal must be converted to digital values, such that it can be represented in bits (ones and zeros). This is done by taking a range of voltages that you expect to be measured, and divide that by the amount of bits that the system can take (see Figure 3) 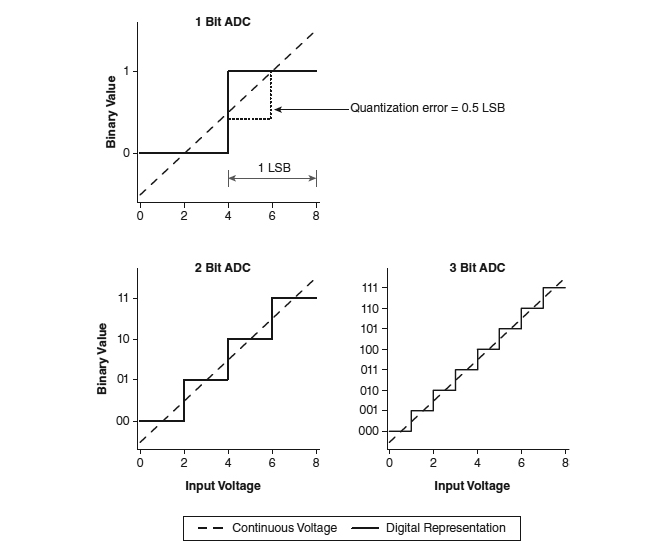 EEG can only measure the activity of pyramidal cells that are perpendicular to the scalp and at the surface of the cortex. Are the other pyramidal cells then just lost? Not really. Another really neat property of electrical flow is that it creates a magnetic field that is perpendicular to the dipole (See Figure 4). For the magnetic field to “move out of the head”, making it measurable, the pyramidal cells must lie parallel to the scalp. Magnetic fields also do not need conductive tissue to be measured. This can be recorded with magneto-encephalography (MEG). MEG is thus a perfect complement to EEG, although deeper positioned structures can still not be recorded.

Not the answer you're looking for? Browse other questions tagged methodology eeg neurophysiology meg or ask your own question.

7
How can items from a general self-esteem/efficacy measure be changed to measure context specific self-esteem/efficacy?
5
Component naming of MEG vs. EEG
4
EEG Signal quality
3
How to calculate absolute power for EEG from power spectra density?
0
Difference in MEG and EEG readings