Why do we need to break down long sentences to understand them?

Why do we need to break down long sentences that won't immediately scan? Is it an attention thing? Working memory, executive function?

Studies show that if there are many stimuli present (especially if they are task-related)...".

is a straightforward sentence. The only ambiguous term is "they". Does it mean "studies" or "stimuli"? In this case it is, obviously, stimuli, but the issue seems to be that i need to read the "they" slower, and am not primed to. What part of cognition is being tested?

First off, the difficulty in the specific example given in the question is more a matter of proper writing habits than anything else. The use of parentheses is often discouraged because it disrupts sentence structure and therefore interferes with the flow of information. Secondly, the use of referring words (pronouns) to earlier parts of the sentence are generally encouraged, barred that the pronoun is unambiguous. In the example the pronoun is ambiguous, as both 'stimuli' and 'studies' can be 'task-related'. The cited sentence is therefore a prime example of how not to write a decent English sentence and could be a textbook example for Scientific-English writing courses.

In terms of cognition, it is indeed related to working memory, as you need to remember the words in the earlier part of the sentence. Of course attention (vigilance) is needed to extract the information in the sentence. Executive function therefore is involved, as it includes all aforementioned processes.

To understand why long sentences are difficult to parse we need to understand how we generally parse sentences. In linguistics, often, parse tree are used to show how people structure sentences:

A parse tree is a tree structure in which sentences (S) are deconstructed in different phrases. There are

The object can be many many things. As you can see in the below picture, another NP is added, to finish this simple sentence. 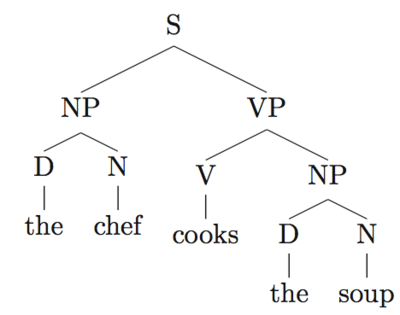 In this incredibly simple example, it is clear that we do not need to break down the sentence that much, nor is there any ambiguity. However, sentences can become more complex, by adding a prepositional phrase (PP): 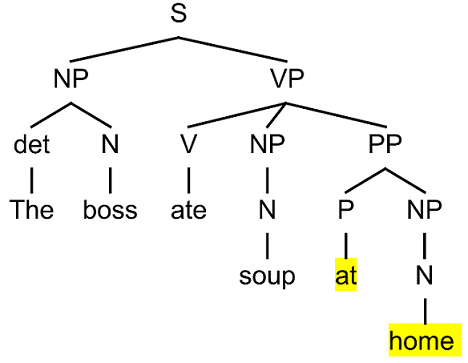 Complexity and ambiguity
The longer sentences are, the more complex these trees become. The difficulty in creating these trees is finding the correct relations between phrases and, therefore, the structure of the tree. In some cases, even multiple sentences must be combined in one tree: 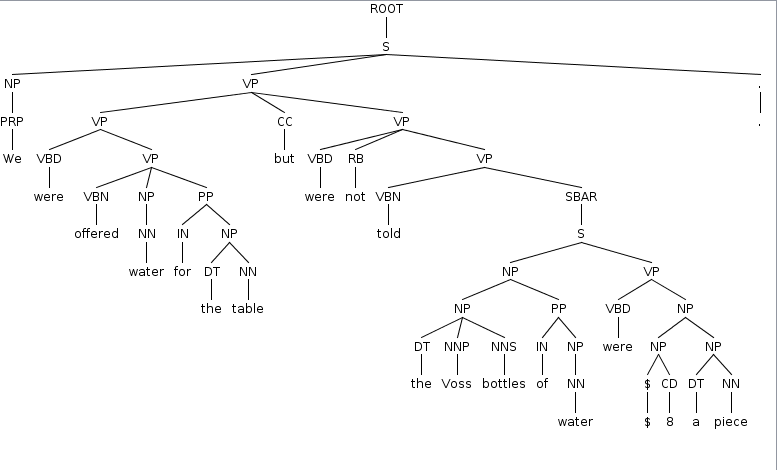 The second sentence is what comes below SBAR, the auxiliary node for a new S. Moreover, as you can see, there is a line leaving the right side of the picture. The sentence could thus become even longer and more complex.

When sentences are ambiguous, it is even possible to construct multiple trees that are correct, but have a different meaning. There are ways to notate these ambiguous trees, but I won't/cannot go into that. At linguistics.se, there is a question covering that.

Also, here is a post about creating parse trees/syntax trees in general, including a reference.

Not the answer you're looking for? Browse other questions tagged linguistics reading or ask your own question.

4
When counting a given letter in sentences, why do people tend to omit occurrences in certain common words?
9
Why does the brain skip over repeated “the” words in sentences?
6
Why can't we understand text without subvocalizating it?
4
Do pictures help young children read (understand meaning) better or does it give them a delayed sense of imagination when decoding information?