A paper I'm looking at titled "Synaptic Modifications in Cultured Hippocampal Neurons: Dependence on Spike Timing, Synaptic Strength, and Postsynaptic Cell Type" (can be found here) showed a relationship between spike timing and LTP/LTD. However, I'm having a bit of difficulty understanding what Figure 7 shows: 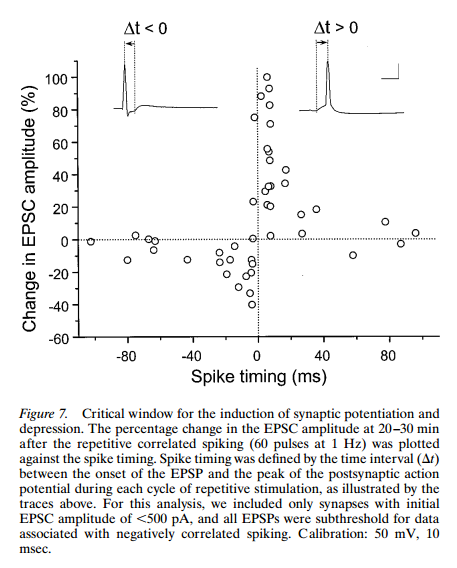 Since this photo I've seen published in multiple textbooks and reviews, it seems like a very important figure to understand what is going on. According to what they wrote in the introduction:

The best explanation for STDP that I've ever seen is Nicky Case's Neurotic Neurons. In this Explorable Explanation, I think you'll find that your misunderstanding lies in the fact that both the pre-synaptic (Neuron A) and the post-synaptic neuron (Neuron B) exist in a network of other neurons. They are not only connected to each other. You are correct in saying that it often takes more than one incoming spike to make a neuron fire. These spikes are usually coming from other neurons (Neuron C, D, E... etc). So it's incorrect to think that "the only way a postsynaptic spike occurs is when the presynaptic neuron fires into the postsynaptic one".

So, to summarize, yes the time interval is the time difference between the last pre-synaptic spike to the first spike of the post-synaptic spike. These neurons exist in a network of neurons. It's probably best to think of STDP as a coincidence detector.

If you have two unidirectional neurons (ignoring back-propagation), both will elicit an action potential above a certain treshold. As you probably know, action potentials have a certain recovery rate. However, it is the intracellular processes that distinguish LTP from LTD. In LTP, Ca2+ influx is higher than in LTD and activates a protein cascade. LTP activates Ca2+/calmodulin kinase II (CaMKII), while LTD deactivatse CaMKII. Both LTP and LTD are input specific – repeated stimulation at different frequencies will result in different neurotransmitory processes at the synapse, due to different levels of Ca2+ influx, which in turn triggers two different types of protein cascades that have a significant impact on the connectivity as well as the type of memory that the type of plasticity (LTP or LTD) is associated with.

Not the answer you're looking for? Browse other questions tagged neuroscience theoretical-neuroscience plasticity or ask your own question.

10
How do SSRIs work?
8
Strengthened Inhibitory Connections Between Neurons
1
Understanding neuronal firing in the context of Spike Timing Dependent Plasticity
8
Do all types of synapses in the brain change based on spike-timing-dependent plasticity?
5
EPSP/IPSP amplitude values?
18
Is back-prop biologically plausible?
6
Spike-timing-dependent plasticity versus Homeostatic plasticity
3
What is actually happening with neuron during refractory period?
0
What is "required reading" in training that describe mechanisms behind learning?