What are the main sensory features of earliest memories of childhood?

I understand that experiences are compound in nature and take inputs from multiple senses. But when I ask people to describe the sense associated with their earliest memories I get answers that vary. For some its visual, others auditory yet others tactile.

I would like to know more about the specific aspect of first memories that help me understand the reason for this varied response.

I found a study by Mullen (1994) which discusses the empirical literature on earliest childhood memories (see also the wikipedia article on childhood amensia).

Here are a few interesting quotes:

The average age of earliest memory is consistently found to be in the vicinity of 3.5 years.

Mullen mentions theories for the amnesia prior to this point focussing particularly on the role of language development and training provided by parents in how to socially construct accessible memories.

Mullen distinguishes between types of memories which in some sense pertains to your question about senses:

White and Pillemer (1979) suggest that there may be a dual system of autobiographical memory in which one aspect is a verbally accessible store of interconnected narratives organized with respect to a time frame and the other aspect is an unorganized collection of fragments of images, behaviors and emotions.

In study 3, Mullen (1994) examined the content of earliest reported memories. Here is a table summarising content features of these memories: 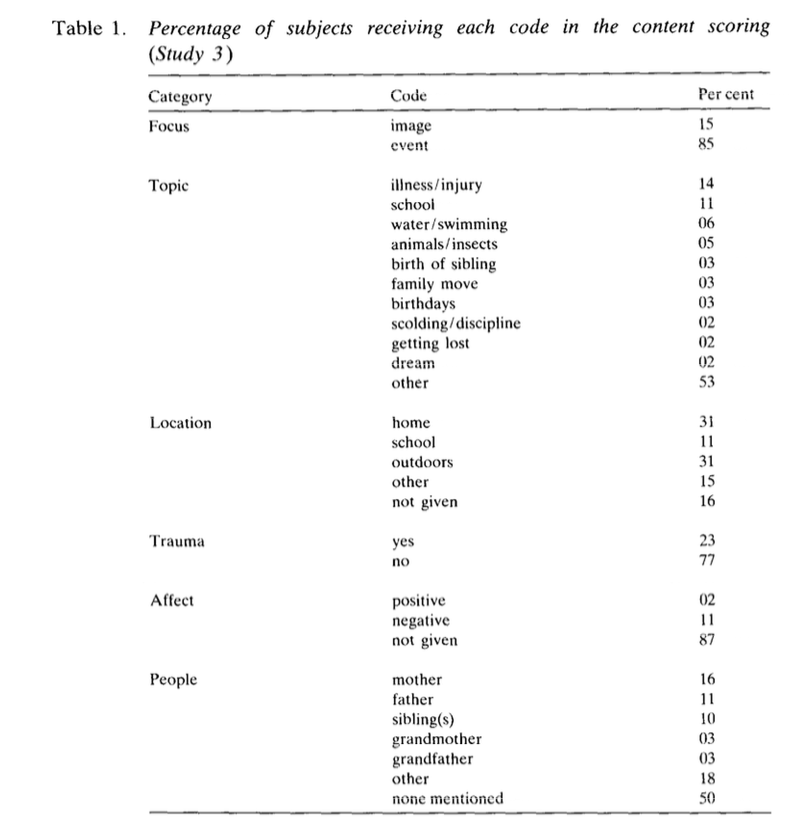 Thus, it appears that most of these memories reflect an event in some sense.

Of course there are a bunch of methodological things going on here. I imagine if you delve into the references or these related articles you will find out more on the topic.

Not the answer you're looking for? Browse other questions tagged memory developmental-psychology or ask your own question.

7
What are the main causes of whether a person becomes introverted or extraverted?
12
Why do we not remember things from the first couple of years of childhood?
4
Reduction of the hippocampus due to childhood neglect/abuse
9
Are all conscious experiences stored as memories?