Many of us must have come across personality theories like MBTI which use part of Carl Jung's concepts to make a theoretical system used to divide people into types. For example, MBTI says that if the person is not neurotic or something like that, then he/she must fall into one among the 16 personality types that have been defined. Over simplification of the MBTI over the Internet has made the base of this theory unknown to many people, but talking about that in this question helps nobody.

MBTI as taken by psychologists, seems to be centered more around the concept of Functions more than the four letter model. Typing a person is done generally after recognizing their Dominant function. Some psychologists seem to have made their own different models about these Cognitive Functions (like John Beebe and Lenore Thomson for example). Some claiming 8 exist in the human Psyche, and some claiming 4 exist, some saying they gradually develop, some opposing the views and so on...

Recently, I have come across a Youtube video in which a researcher claims to have made this theory scientifically observable and researchable - and seeing that this video has been made at Google Talks makes it believable.

I think Jung's concepts - which are based on observation, introspection, Energy flow etc. seem to be somewhat like Pseudoscience to any scientific mind. However, after watching this video I started to wonder whether what he says is really true or not?

Firstly, as quoted by the source above, Nardi speaks about various regions in Neo Cortex region where he placed these EEG sensors. From what I have read, it seems that he mapped the regions to some activities. 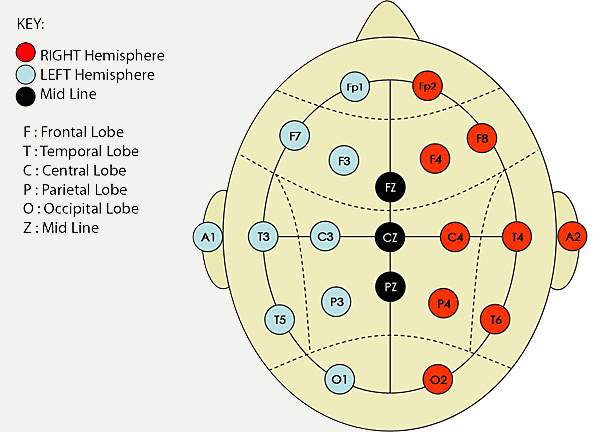 Here's what he says about these regions is like:

Writing all of them here would make this question look like a book, but I want to know whether all this is as rigid as it looks or not. I want to know where Nardi is making a mistake in this research. (There could be some activities which might have been mapped wrongly, or those which have deeper mechanisms in brain rather than just in Neocortex region.)

Secondly, I will not be long here, but there is a similar part where he speaks about various patterns (in regions of brain "lighting up") he observed during this observation. Although asking for an evidence to this would be basically an extension to the first question, but my question here would be whether such patterns (not necessarily the same ones) have ever been classified/suggested in literature already?

Lastly, (this might be rhetoric question) if the answer to the above question is affirmative, Does this imply that theories like MBTI are really valid, and that there are really types among people's brains? (Nardi tried to map those patterns into types of people, as I said their dominant function)

The research done by Dardio Nardi (the researcher you're referring to) clearly shows that something is there. Although, he would have no way of knowing as to whether his samples were of the particular type, or if what's being demonstrated really demonstrates use of that particular cognitive function. E.g doing something logical doesn't necessarily mean you're 'using' Ti.

I do believe we have innate, instinctive preferences and can classify them into types as such, but I truly doubt that Jung's work would be 100% accurate. Even Jung was hesitant to be exacting in his understanding of the psyche - which lead him to leave a lot of holes in his model.

Myers and Briggs filled those holes with many assumptions - which is why the functions are a far better application to finding somebody's 'type'.

So yes, I would say that they do exist. But probably not exactly in the way they were described by Jung. Hopefully people begin to think critically about this, then maybe we can actually see some results.

Not the answer you're looking for? Browse other questions tagged personality measurement jung or ask your own question.

43
What is the current "accepted" science behind dream interpretation?
19
Are there any personality theories that use the scientific method?
14
At what point does a complex become pathological?
6
What is the basis behind the idea of Dom-Tert loops in Jung Function Theory?
5
What is the consequence for the MBTI in not having a neuroticism factor?

17
What form might Jungian archetypes take in the brain?
19
Are there any personality theories that use the scientific method?
14
Is the theory of Information Metabolism a reasonable scientific theory?
6
What is the basis behind the idea of Dom-Tert loops in Jung Function Theory?
0
Analysis according to Jung's Psychological Types
14
Is there a reasonable scientific backing for Carl Jung's type theories?
1
Jung's Anima and Neurological Basis in Split-Brain Patients; Left-Persona and Right-Anima