Are women better at multitasking?

I've observed multiple occasions where females are better at multitasking than males. It's not rare to see a lady driving a car, doing her make up and talking on the phone at the same time. Once I worked at a call center, and women were able to talk on the phone with a client and successfully perform a second task without much disruption. From my experience men have struggled with the same or similar combination of tasks.

Is there any research that backs up my anecdotal evidence?

The notion that women are better multitaskers is deeply grained in our society. There is even an evolutionary explanation as of why that may be the case. As paraphrased by Ren, Zhou and Fu (2009):

[...] females who stayed at home could not afford focusing solely on food preparation because the offspring cannot be left on their own. In other words, the structure of primitive human society exerted a strong selection pressure against females who were incapable of juggling several chores.

Women are better
In controlled experiments, people even found some evidence (Stoet et al, 2013;Ren et al, 2009) that supports that women are better multitaskers. In the study of Stoet et al, stimuli were shown that had two dimensions (shape and filling) each of which had two features (which determined which button to press). Only when the stimulus was presented, it became apparent on which dimension the participant had to focus. The results showed that 120 women performed significantly better on the task, compared to 120 men. As you can see from the Figure, the effect is not that large though. With enough participants, every minor effect will become significant at one point. 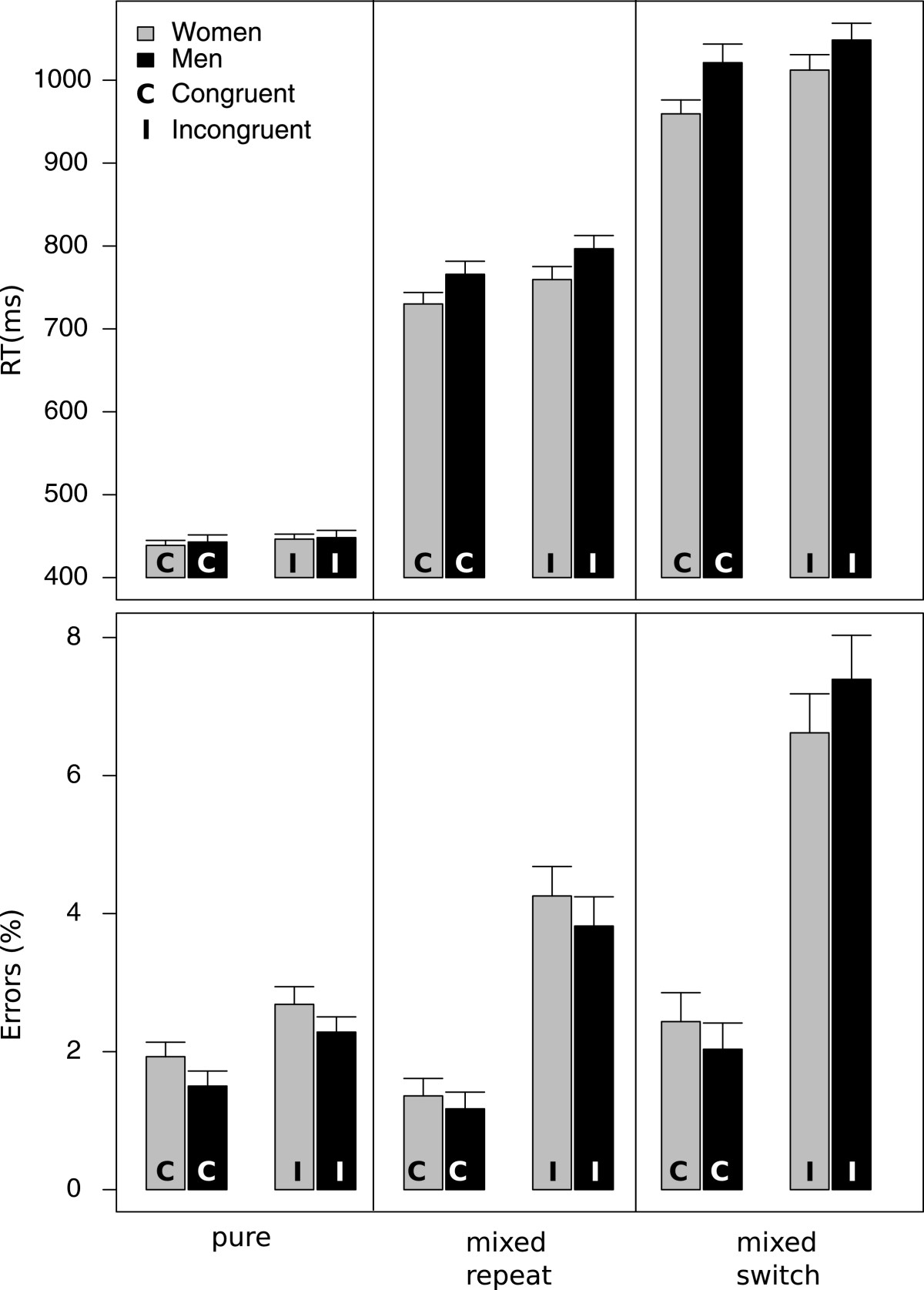 In the study of Ren, the participants were to perform a go-nogo task, followed by a flanker task (target identification). In a simple condition (always go, followed by a flanker task), men and women were, in a way, monotasking the flanker task. In the hierarchical condition participants had to make a decision on both go-nogo, which determined whether the flanker task had to be performed. There are two important notions that we must consider here. First of all, women improved on the hierarchical conditions! This is very surprising given the general consensus is that multitasking is detrimental for performance. Secondary task performance, for instance, is even being used as a measure for mental workload (Wickens, 1983; Kaber, 1999).

This surprising observation may be explained by the notion of the authors themselves (which is the second notion): the task at hand is not necessarily multitasking in the sense of rapid switching between (often unrelated) tasks. Instead, I think, the task in this study must be seen as sequential monotasking, in which the first task determines how the second one must be performed.

Then why do we think women are better multitaskers?

Stoet et al, performed two experiments. In the second experiment, three more ecological valid task were to be performed concurrently, for which the participants had eight minutes in total. The order in which they had to be performed was up to the participants. Here, less obvious differences were found. In two of the task there was no significant difference in performance. One task, the key-finding task, did show that women were significantly better. However, we must again ask, is this because of their multitasking ability?

Because the participants could decide when and how to perform the task (sequential monotasking or multitasking-wise), they were in charge of the planning. It has been shown that people are generally bad at this and performance always is affected (Katidioti, 2014; see also Provable ROI for call center rest periods?; Buser and Peter). What Buser and Peter found, however, is that women are less inclined to multitask compared to men when given the choice. If this is indeed the case, this may explain the fact that women performed better at the key searching task.

Not the answer you're looking for? Browse other questions tagged gender multi-tasking or ask your own question.

8
Do women talk more than men?
7
What effects does multitasking have on comprehension and memory of audiobooks/speech?
10
Why are trans-women more common than trans-men?