Is a network of neurons the only factor in memory?

I'm actually writing a science fiction novel set a couple decades in the future. Brains are not my field. I've done as much research as I could.

In the story, the protagonist finds out he has died, but to have his deceased brain scanned, mapping out all the nuerons and synapse connections. Perhaps with an advanced MRI.

Then a "system" essentially iterates over many various stimuli. Simulating to the brain the visual sensation of seeing a bird, for example. The machine looks for the corresponding neurons to fire when seeing a bird. The machine iterates over many birds to understand how this brain stores "birds", and repeats this process for basically anything that could be detected from the senses.

Then this brain could be stored in a computer and bioprinted.

I've seen videos of researchers today simulating a primitive network of neurons, so this seems vaguely possible. I know we are also currently capable of bioprinting blood vessels and skin today.

If a brain was bioprinted with the exact neuron network and synapse connections as a host brain, would this brain theoretically hold the previous memories from the host it's made from?

According to my ongoing informal research, there are two sides of brain preservation innovation: 1) the preservation and mapping (building) the connectome; and 2) the reinstantiation of memories and/or creating consciousness from a connectome.

[N]euroscience is now identifying the synaptic and nuclear structures that contain our unique memories and identity, and new electron microscopy (EM) imaging techniques are allowing us to verify when these structures have been successfully preserved, from gross connectivity in the connectome, all the way to particular synaptic features, receptor distributions, and even the signal states (phosphorylation, methylation, acetylation, etc.) of individual brain proteins and epigenomic DNA.

Recently, MRI machines have been built that can image individual cell proteins, improbable as this sounds. Such technology may one day give us the ability to inexpensively and nondestructively scan preserved brains to upload the molecular features of memory and identity.

What is a Connectome?

A connectome* is the complete map of the neural connections in a brain. It is sometimes referred to as a “wiring diagram” of the molecular connections between neurons, trading on the analogy of a brain to an electronic device, where axons and dendrites are wires and neuron bodies are components. Depending on the scientist, the term connectome may or may not also include learning-relevant molecular states at each synaptic connection (the “synaptome”) and any learning-relevant changes in the nucleus of each neuron (the “epigenome”). 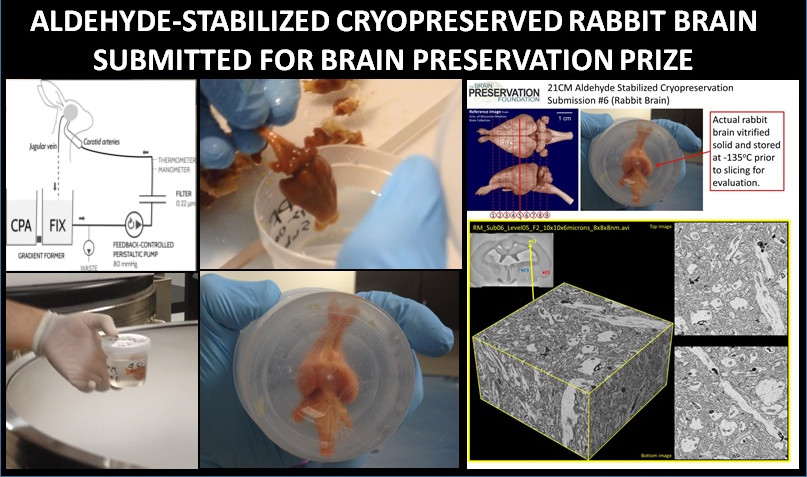 Recently, "The Small Mammal BPF Prize" was won. It's one in a series of competitions for brain preservation (BP) achievements. This competition is doing for BP what XPRIZE is doing for space innovation with competitions like the Ansari X Prize.

The winning team used a combination of plastination (chemopreservation) and cryonics (cryopreservation) to preserve a rabbit brain. From the press release http://www.brainpreservation.org/small-mammal-announcement/:

The Small Mammal Brain Preservation Prize has officially been won by researchers at 21st Century Medicine. Using a combination of ultrafast chemical fixation and cryogenic storage, it is the first demonstration that near­ perfect, long­-term structural preservation of an intact mammalian brain is achievable.

In regard to reinstantiation of memories and/or creating consciousness: when progressive innovations in technology enable mapping of the entire connectome, the next step is applying a "runtime" to the structure. This runtime is described as "cycles" by György Buzsáki in his book Rhythms of the Brain.

In a sequence of "cycles," György Buzsáki guides the reader from the physics of oscillations through neuronal assembly organization to complex cognitive processing and memory storage.

The OpenWorm project is an example of contemporary connectome innovation, which is a necessary step for the memory/consciousness side of BP. From http://www.openworm.org:

OpenWorm is an open source project dedicated to creating the world’s first virtual organism in a computer, a C.elegans nematode. Throughout the years we have built a network of relationships with with many biologists and neuroscientists interested in C. elegant.

Because a lone connectome is a snapshot of pathways through which information might flow in an incredibly dynamic organ, it cannot reveal how neurons behave in real time, nor does it account for the many mysterious ways that neurons regulate one another's behavior. Without such maps, however, scientists cannot thoroughly understand how the brain processes information at the level of the circuit. In combination with other tools, the C. elegans connectome has in fact taught scientists a lot about the worm's behavior; partial connectomes that researchers have established in the crustacean nervous system have been similarly helpful. Scientists are also learning how to make connectomes faster than before and to enhance the information they provide. Many researchers in the field summarize their philosophy like this: "A connectome is necessary, but not sufficient." 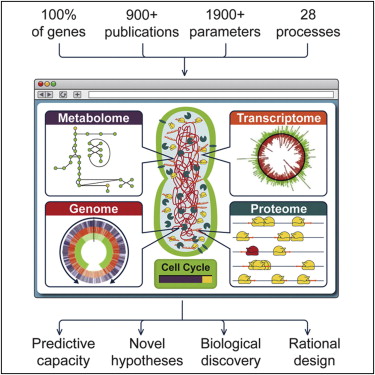 I believe Stanford's computer model of an organism is in the scope of BP and could be the foundation of what eventually becomes entire brain/connectome virtualization. This breakthrough is an example of the technological capabilities in 2012. Now, in 2016 with AI tech on the rise, exponential progress in this field may become a reality in our lifetime.

[In 2012] Stanford researchers produce first complete computer model of an organism. A mammoth effort has produced a complete computational model of the bacterium Mycoplasma genitalium, opening the door for biological computer-aided design.

Understanding how complex phenotypes arise from individual molecules and their interactions is a primary challenge in biology that computational approaches are poised to tackle. We report a whole-cell computational model of the life cycle of the human pathogen Mycoplasma genitalium that includes all of its molecular components and their interactions. An integrative approach to modeling that combines diverse mathematics enabled the simultaneous inclusion of fundamentally different cellular processes and experimental measurements. Our whole-cell model accounts for all annotated gene functions and was validated against a broad range of data. The model provides insights into many previously unobserved cellular behaviors, including in vivo rates of protein-DNA association and an inverse relationship between the durations of DNA replication initiation and replication. In addition, experimental analysis directed by model predictions identified previously undetected kinetic parameters and biological functions. We conclude that comprehensive whole-cell models can be used to facilitate biological discovery.

Not the answer you're looking for? Browse other questions tagged neuroscience memory neural-network philosophy-of-mind or ask your own question.

1
What leaps in technology would be needed to scan the total state of the human brain?
0
How close is it to reality in future of consciousness to be transferable as shown in the movie Chappie?

29
How are newly created neurons recruited into existing networks?
7
What effects does multitasking have on comprehension and memory of audiobooks/speech?
1
How many items in a list can a human create without repetition?
0
What is the neurophysiology of a thought?
6
How is the brain cooled?
2
Are there animals with only excitatory neurons?