What models/mechanisms exist for the brain to chain movements together?

Motor Sequence Learning is the study of the cognitive ability to chain various motor sequences together. The most intuitive example of this is learning to play a sequence of notes on a piano. Initially, each note will be played hesitantly while consulting the sheet music for guidance. However, with practice, more and more of the sequence becomes memorised and can be played smoothly. Additionally, sequences that are learned can be transferred to other contexts.

What is the most comprehensive model or description of neurophysiological mechanisms of this cognitive ability?

In the paper "Control of automated behavior: insights from the discrete sequence production task" a task similar to piano playing is discussed. The task, shown in the figure below, involves a user pressing a key corresponding to visual input. 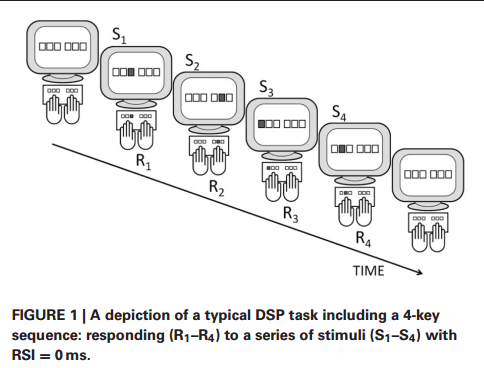 One of the most interesting results from the paper is, as shown below, after learning, the response times of certain series of movements have lower reaction times. They also seem to be organised in specifically sized chunks. 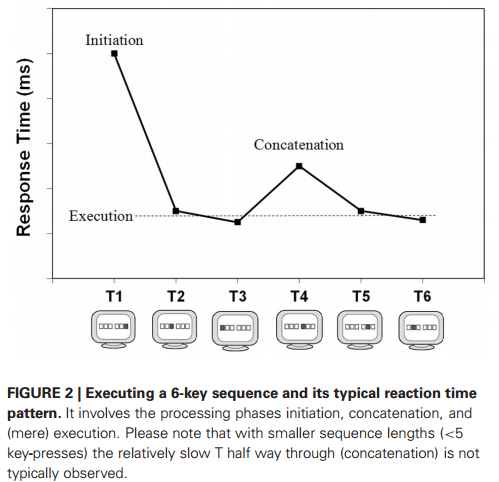 The model of how this works is called the Dual Processor Model (DMP), which claims that two processors, one cognitive and one motor, race each other to execute a task. It is only described at a high level and never built into a model.

Not the answer you're looking for? Browse other questions tagged learning theoretical-neuroscience computational-modeling motor or ask your own question.

7
How are movements stored in the brain?

13
What structures in the brain are called upon to strengthen coupling between bilateral movements?
27
What are some of the drawbacks to probabilistic models of cognition?
10
What are the mathematical models of memory?
1
Do gating mechanisms in the neocortex have individual degrees for all gated connections?
7
How are movements stored in the brain?
5
What sources of randomness does the brain use for sampling?
2
ML/Neuroscience: TensorFlow vs PyTorch vs Keras for bulding NN models of the nervous system?
1
Biologically plausible models for causal inference in the human brain