Does each sensory neuron type have a characteristic spike sequence pattern?

It is known that all sensory information is input to the brain as neural spike sequences. Now, to distinguish between the spike sequences generated by retinal red/blue/green cone cells from each other, and these from the cochlear (inner ear) hair cells, and so on, some sort of encoding scheme must be used.

To further clarify, in the case of retinal cone cells, the rate of incident light quanta in a given energy range, is the primary information that is coded. But, if all 3 types of cone cells generated identical responses for a given rate-of-incidence, like the CCD pixels in our digital cameras do, then there would be no way for upstream neurons to tell what type of cone cell a spike sequence came from. Instead, my guess is that, each type of cone cell encodes the rate-of-incidence in its own characteristic way, similar to how different types of musical instruments sound differently, even when playing the same pitch at the same intensity, via timbre. 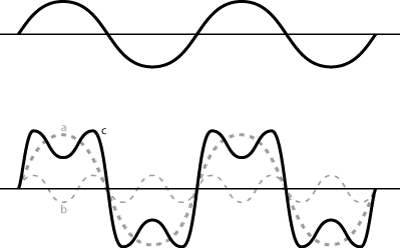 An oversimplified illustration of Timbre

Is there evidence that each sensory neuron type has a characteristic spike sequence pattern?

Why message type must be encoded in the message itself

During the development of the visual system, the retina, the LGN and the visual cortex develop separately initially and sometime later, axons from the retinal ganglions grow into LGN, and optic radiations from the LGN grow and reach into the cortex. As far as we can tell it is not guaranteed that a specific ganglion will project its axon to a specific neuron in the LGN. All that is guaranteed by the growth process is that ganglions close together will project to LGN neurons that are also close together.

Given this development process, when a higher region say in the V1 receives a spike stream from a neuron somewhere lower, the question arises: how does it know that this spike stream means, red, blue or green? A simple idea that occurred to me from information theory is that the message type could somehow be encoded in the message itself.

Evidence for characteristic spike patterns for each sensory neuron type would take us one more step towards understanding qualia, the hard problem of consciousness. My speculation is that qualia are the neuronal analogs of timbre in musical instruments.

Erwin Schrödinger thought we'd never get there. He said, "The sensation of color cannot be accounted for by the physicist's objective picture of light [as] waves [or as quanta]. Could the physiologist account for it, if he had fuller knowledge than he has of the processes in the retina and the nervous processes set up by them in the optical nerve bundles and in the brain? I do not think so."

I guess he's right in the sense that we will never be able to fully wrap our minds around the mysterious and ineffable nature of qualia.

However, evidence of characteristic spike patterns would offer resolutions to qualia related thought experiments, such as Is there something about Mary?, that philosophers seem to be pulling their hair out over.

We know quite a lot about how sensory information is represented in the nervous system. The simple fact of myelinated axons that don't interfere with each other already accounts for the problem you've proposed a solution for.

if all 3 types of cone cells generated identical responses for a given rate-of-incidence... then there would be no way for upstream neurons to tell what type of cone cell a spike sequence came from

Here I believe is where you've made an error. The transmission of activity from the sensory neuron itself to an upstream neuron inherently conveys information about the sensation. The firing of the sensory neuron is a translation of the external phenomena to an internal neural code. No extra information is needed to represent the source of the activity.

After an eye opening experience rereading Hubel's book, Eye, Brain & Vision and a bunch of papers, I found that the answer to my question is a superficial yes and a strong no.

It is unsurprising that neuroscientists have investigated if there are analog characteristics to neural spike streams:

Neurons communicate with each other using stereotyped electric pulses, called spikes. It is believed that neurons convey no information other than the frequency of the transmitted spikes, called the firing rate. However, it is possible that neurons may communicate some information through the finer temporal patterns of the spikes because biological, as well as electrical/mechanical signals generally reveal internal conditions of the signal generator...

... First, we found that neurons exhibit stable firing patterns that can be characterized as “regular”, “random”, and “bursty”. Second, we observed a strong correlation between the type of signaling pattern exhibited by neurons in a given area and the function of that area.

So, in a superficial sense the answer is yes, sensory neurons might have characteristic firing patterns. However, when it comes to transmitting generic analog signals, neurons have one big handicap: any analog features in the signal are lost at synaptic junctions, where the electrical signal is transformed into a chemical message.

One way to preserve at least part of the analog information, say message type encoded in a characteristic pattern, might be to have the message transmitted over a sequence of neurons of the same size and type which all fire in a similar way. However, in the visual system, there is no evidence for this. The retinal ganglion cells have their axons end in the LGN whose neurons are very different, and these in turn send their spikes to V1 whose neurons are again different. So, any characteristic patterns generated by the ganglions are lost in the LGN synapses.

The bigger question still remains: how do upper regions figure out what type of ganglion is sending the spike stream? (I'll formulate this more properly as a separate question).

11
How many dendrite connections vs axon terminals does a multipolar cerebral neuron have?
3
What is the location of the center-surround receptive fields of retinal ganglion cells?