How accurate is this explanation of memory?

I'm no cognitive scientist, and this video I'm about to cite is certainly not claiming to be a good cog sci resource, but I have done some studying up on neurology and some of the parts of this guy's (detailed) explanation of how memory works seems different from what I understood.

The video: Film Theory: How to KILL DEADPOOL! (at 6:03) probably gave 85% (or 99%?) of the 7.7 million viewers who watched it the most detailed explanation they'd ever received of how memory works. I'm just curious to know how much of his explanation is accurate.

So, how accurate is this explanation of memory?

Really nice video and pretty much seems to be correct. The only thing that i am questioning is about the patterns. He says they won't exist after regeneration. However, just a thought: if you would replace one neuron of a network with a new (exactly the same but younger) neuron, it would receive the same input and produce the same output right? Then why would a memory be lost. Taking a step further, if an entire network is replaced, wouldn't the hippocampus with Long Term Memories (LTM)s still be able to give the same input to that network, which would then show a similar activation pattern, thus remembering?

To finish my short argument. Assuming that the hippocampus indeed stores the patterns for LTMs and the cells in Deadpool regenerate in an identical way, then I believe that LTMs may still exist after regeneration. Only when the hippocampus is affected, LTMs may be lost. I base this just on my thought experiment however and have no scientific proof. Maybe you can ask the YouTube guy for some references.

Well, aside from the mention of there being only 100 million neurons in the brain (there are actually 86-100 billion of them), the general idea that he communicates is correct. The activity pattern of a neuron through time (i.e. temporal activation) is how cognitions are encoded. NeuronA firing 5 milliseconds before NeuronB is a VERY different pattern than NeuronA firing 5 milliseconds after NeuronB. We see this very easily in the low-level retinal bipolar cells.

This is seen most readily in so-called "center/surround" cells. Although the idea of center/surround is simplified to the point that it ignores some of the more complex aspects of the phenomenon (even by renowned scientists), it still teaches us an interesting thing about how brains work.

It has been shown that certain Retinal Ganglion Cells possess very idealized center/surround properties. This means that some of them react to light stimuli in a way that causes rapid action potentials when the light is shone only in the center of the RGC's receptive field. Other RGCs demonstrate a reaction of rapid action potentials only when light is shone in the surround field of the RGC's receptive field, with no light in the center. This causes both cells to have inverse properties, where one cell is active when the other one is not. Then after a small delay, the activity of each cell flip-flops so that the one that was active is now inhibited and the other cell becomes active. 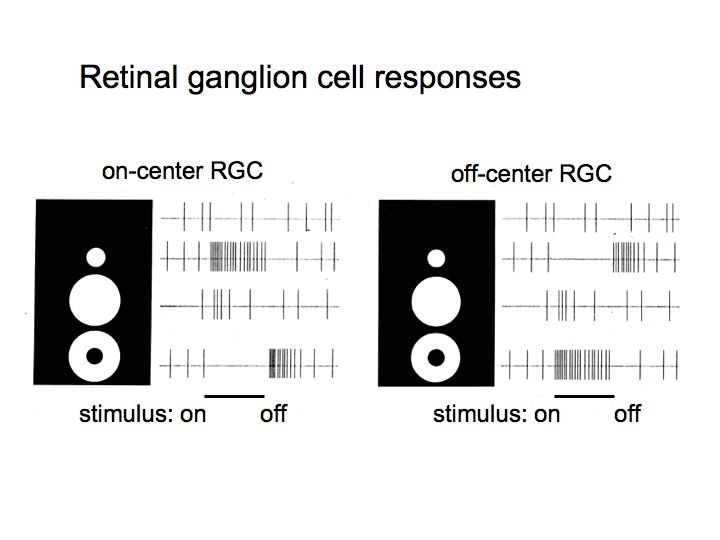 Other RGCs also react very complexly to strange patterns of light stimuli. After studying these phenomena for a while, it becomes clear that the timing (onset or delay) of the action potentials from a neuron communicates very important codes to the postsynaptic neurons. So yes, a huge part for neurons to interpret information from a string of action potentials is largely rooted in the temporal code, relative to other neurons.

Not the answer you're looking for? Browse other questions tagged memory or ask your own question.

24
How to reliably measure working memory capacity?
7
How much can users hold in their short term memory
4
How does chronic stress improve memory processes?
2
Memory - Remembering a Source
3
How would losing episodic memory affect a person's functioning?
4
How to measure verbal and visual working memory?
3
How is memory structured (from a modeling perspective)?
2
How does the brain’s visual memory work?