What is the relation of visual quality and distance from the central field of view?

I have read somewhere that

Our visual perception degrades non-linearly with distance from the fovea.

However, it was not referenced. I was wondering if there is a reference talking about this?

Also, is there a scientific reference stating the degradation of vision as a function of degrees in the field of view?

neuroscience vision neurophysiology
Share
Improve this question
edited May 26, 2016 at 21:05

Assuming you are talking about the ability of the visual system to resolve spatial detail (resolution, if you wish), then your question is on visual acuity as a function of eccentricity on the retina (Fig. 1).

Due to the densely packed cones at the fovea (corresponding to the central field of view (FOV), see Fig. 1), visual acuity (VA) is the greatest at the center of fixation. More eccentrically, VA declines markedly. E.g., at 10 minutes of arc (1/6 of a degree) from fixation, there is a 25 % loss of visual acuity (Fig. 1.) This dependence of VA on eccentricity is indeed nonlinear (cf. Fig. 1) and correlates with the cone packing density and photopic resolution in the region up to a few degrees eccentricity.

However, at larger eccentricities, visual acuity is worse than that predicted by cone spacing alone, indicating that other post-receptoral retinal elements are the limiting factor. One of these factors is the increased density of rods in eccentric regions; rods are built for speed and sensitivity. The latter is accomplished in part by funneling the inputs of multiple rods onto a single retinal ganglion cell (RGC). RGCs transmit the signals via the optic nerve to the visual centers in the brain stem, ultimately ending up in the brain. Foveal cones, on the other hand, are connected 1:1 and hence the spatial resolution and thus SA is much better in foveal regions. The foveal region contains high densities of cones (good VA), while more eccentrically more rods are present (worse VA); see Fig. 2. This is exactly the reason that we read by focusing our central foveal view on the characters. 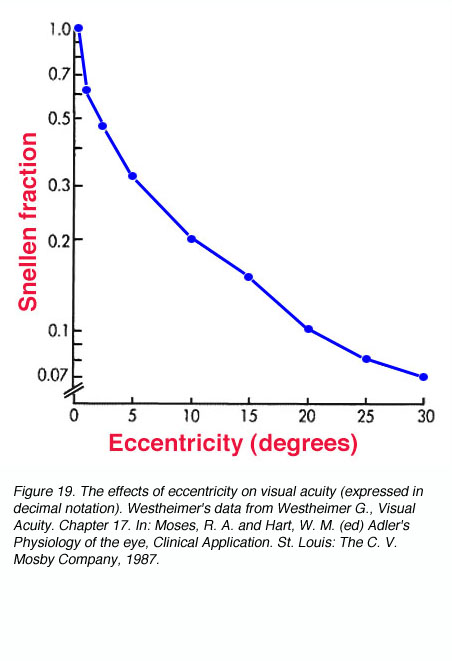 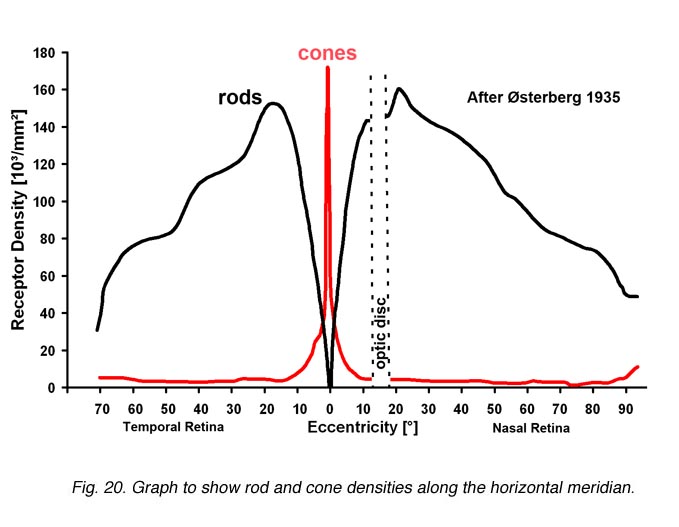 Fig. 2. Rod and cone densities as a function of eccentricity. Source: Kolb (2016)

Not the answer you're looking for? Browse other questions tagged neuroscience vision neurophysiology or ask your own question.

8
Are there any models of the human visual field of view taking into account head, neck and eye movements and calculating likelihood of fixation?
4
What is the metabolic load of the visual system?
2
What are the estimates in total neurons and average connections per neuron for each of the processing areas of the visual cortex?
5
What is the definition of a receptive field?
4
What is the relationship between visual attention network and visual stream (Two-streams hypothesis)?
9
What does the visual feed from the retina look like before it is processed by the visual cortex?
1
Human vision detection of faint blinking or moving point of light, guidelines for sensitivity versus frequency
6
Visual field testing: Choose between Yes/No, 2AFC, and 2IFC task?