What is a realistic mathematical function to model link decay in a social network?

I'm wondering (as a non-psychologist/cogsci programmer) what would be a good mathematical function to model the decay human relationships, or in other words, how people forget about people they don't interact anymore.

The background: I'm building an agent-based model where agents (representing people) interact, converging on a semi-stable network. If a link between two agents is not used, it should weaken, and eventually fade. Currently the growth and decay of a link between two agents is linear between 0..1 (more interactions -> stronger link, up to 1; less interactions -> link gradually weakens, evetually drops to 0). While my current decay function is linear, for the part that controls who interacts with who, I'm using an S-shaped function - there's a higher chance to interact with agents one knows, and who their "friends" know, but the sum of these values is then "bent" on an S-curve.

The concept of time in the model (counted in iterations of interactions) is relative, so it's not about minutes, days or years. I'm rather interested in a formal model that would capture the dynamics of forgetting people they don't see around anymore. I have a gut feeling it's not linear - one won't start to forget their mother, and the relationship won't weaken, if they don't see her for a little while. But if you just ask for directions on the street, chances are you'll forget the person rather quickly (unless he/she was hot or something; but the agents in my model don't have properties pertaining to such attributes).

A few alternatives could thus be: a sigmoid/S-curve (but the "steepness/curviness" would be a question still; green line below), logarithmic (also looks nice, but steepness of the curve would be a question; yellow), exponential (doesn't seem likely though; orange), perfect memory until arbitrary cutoff (probably not; red), compared to simply linear (blue). 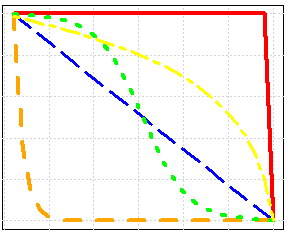 If an curve could be decided on for the decay, then I suppose I would also use it for link growth (e.g., on an S-curve a slow growth in the beginning up to a point (strangers) and towards higher values (friends past the get-to-know phase)). It might be useful to think of the lines on the plot as trajectories of a relationship, with the stength on the y-axis and relative time (either way) on x.

The question then: which one of these functions (and which parameters; or some other function) would be best to model the dynamics of how quickly people start to forget about/lose their connections with other people when they don't interact - or in other words, how a relationship weakens due to sparse contact? I assume there's literature on the subject, but I would have no idea where to start (googling generic keywords like relationships and decay function does not help), so a good answer could cite relevant sources or otherwise show the superiority of one function over the others.

Here's a nice paper that explores the question in depth: https://www.ncbi.nlm.nih.gov/pmc/articles/PMC4626528/. The authors measure the emotional closeness as frequency of contact and number of different activities done together for a group of 25 people over the period of 18 months. As far as I can tell from the charts, the decay curve is closer to an exponent than to anything else for friends. However, for the kin the emotional closeness increases over time - though, again, in an exponential way.

Not the answer you're looking for? Browse other questions tagged social-psychology memory social-networks agent-based-modeling or ask your own question.

11
What are the key algorithms for learning optimal behavior of economic agents?
9
Empirical proof for social network models
9
What is the motivation model behind StackExchange?
5
When delivering a bad news to someone, why shouldn't we show empathy at the beginning?
1
Why a "weak homophilic relationships" can be amplified by "cumulative advantage"