Do dissatisfaction with a job and relationships share the same mental mechanism?

The modern world has two new ways of finding abundance of employment and relationships:

While seemingly different, they share a couple similarities ~ 20% top performers and 20% top attractive people have really easy time finding the next job or romantic partner.

For example, a talented engineer working at Apple may have 50 recruiters knocking on his door, trying to "poach" him to the next hottest job or startup. An attractive woman on Tinder would match with just about any guy she wants and be swamped with messages from guys. Both of these people can find a great (but not perfect) job or a partner easily

From what I've been reading and observing, the ease with which the needs for job/partner can be fulfilled by top percentile of people makes these people devalue the experience. The good things are overlooked once negatives start to show up. This can make a person experience rapid build up of dissatisfaction with the current situation and want to "trade up".

This makes me ask: Are the experiences of dissatisfaction with job and relationships, as experienced by people who "have it easy" related? Do they use the same mental mechanism?

In a sense, this question is a continuation of this one: How long can a person stay happy, excited and motivated about something new? I'm asking if there's a universal mechanism by which a person starts to seek "something better"

In general, personality traits correlate with most measures of satisfaction. Most notably, there is a large literature showing that personality correlates with life satisfaction (see Steel et al). In general, neuroticism is the biggest correlate followed by extraversion and conscientiousness.

The following table from Grant et al summarises two major meta-analyses on the correlation between big 5 personality and various measures of well-being including life satisfaction:

From a theoretical perspective, personality represents an interpretative lens through which people experience the world. Some people are generally more positive or more negative. Some people focus on problems, others focus on what they have. Of course, eve

Here is the meta-analytic estimate of the correlation between personality and intimate partner relationship satisfaction from Malouff et al (2008). 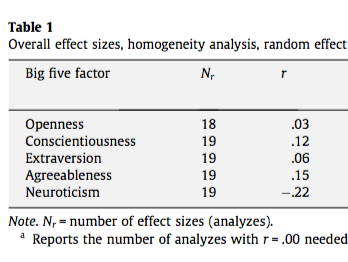 In general, the two tables above look somewhat similar to each other. Neuroticism correlations are the largest in both (r = -.22, r = -24). However, extraversion and conscientiousness may be slightly more relevant to job satisfaction.

Not the answer you're looking for? Browse other questions tagged cognitive-psychology emotion motivation behavioral-economics or ask your own question.

22
How long can a person stay happy, excited and motivated about something new?

5
Do different meta-cognitive measurements depend on the same mechanism?
17
If people did not have to work, what would motivate them to work?
10
Why are humans the only species to maintain relationships with other animals simply for pleasure?
7
What is the relation between fun and motivation? Are they the same?
3
Can observing neutral objects prime the brain to integrate them into new ideas in the waking state?
4
Why some papers suggest that losses and gains are coded by the same mechanism while other suggest that distinct circuits anticipate gain and loss?
1
How can positive and negative mindsets influence interpersonal relationships with others?