Do STDP synapses potentiate AND depress at the same time?

Do STDP synapses potentiate and depress at the same time? Consider the following scenario where two cells are connected by an STDP synapse: PRE and POST. PRE cell fires two action potentials 2 ms apart (A and C below). 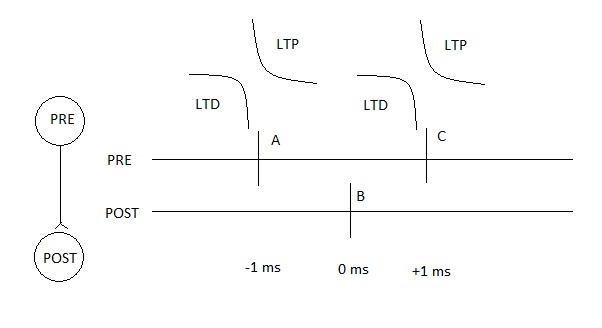 Cell POST fires an action potential (B) equally between the two spikes of the PRE cell. Assuming the STDP curve is symmetrical, would this situation result in no net change of the synaptic weight?

Is it correct, that both depression and facilitation takes place in an STDP synapse simultaneously?

I can't make comments yet, so in the following I will assume that by 'STDP synapse' you mean the model of a synapse using the STDP rule.

The scenario that you are describing is a triplet experiment with a PRE-POST-PRE protocol and to answer your question: Yes, in this case the STDP rule predicts both, weakening and strengthening of the same synapse and given symmetric curves the net change would be zero.

In this paper in Figure 2 C,D they address this scenario (they report a non-zero net change but I guess it's due to asymmetric STDP curves). As they mention, the STDP rule is also symmetric in a different way in that it would predict the same net change in a POST-PRE-POST scenario because it simply adds up the two spike-pair events (PRE-POST and POST-PRE). Also in Figure 2 C,D is shown that experimental results differ from the STDP predictions because they are not the same for the PRE-POST-PRE and the POST-PRE-POST case. This discrepancy is actually the motivation of the more general triplet rule that is described in the reference.

Not the answer you're looking for? Browse other questions tagged learning computational-modeling neural-network plasticity or ask your own question.

11
Is there evidence that STDP is responsible for the ability to infer causation?
9
How can STDP fit with reciprocal connectivity?
5
What is the lifetime of the synapse in the mature brain?
5
Is there a difference between the time/effort it takes for the blind and the sighted to learn to read Braille?
5
A question on synapses
8
Do all types of synapses in the brain change based on spike-timing-dependent plasticity?
5
Is the Resting Potential and Action Potential Thresholds the same across all neurons in a network?
6
Does STDP make the Hebbian learning rule redundant?
5
Spike Timing Dependent Plasticity interpretation