Is the Resting Potential and Action Potential Thresholds the same across all neurons in a network?

Does the action potential and resting potential of a given neuron differ from another neuron within the same network or is it constant? If not what determines and affects these potentials and can they change overtime? If so what factor contribute to this change and how?

In short no. The speed at which and Action Potential (AP) occurs, resting membrane potential, and threshold to AP all vary across types of neutron. See the graph below (Bean, 2007) 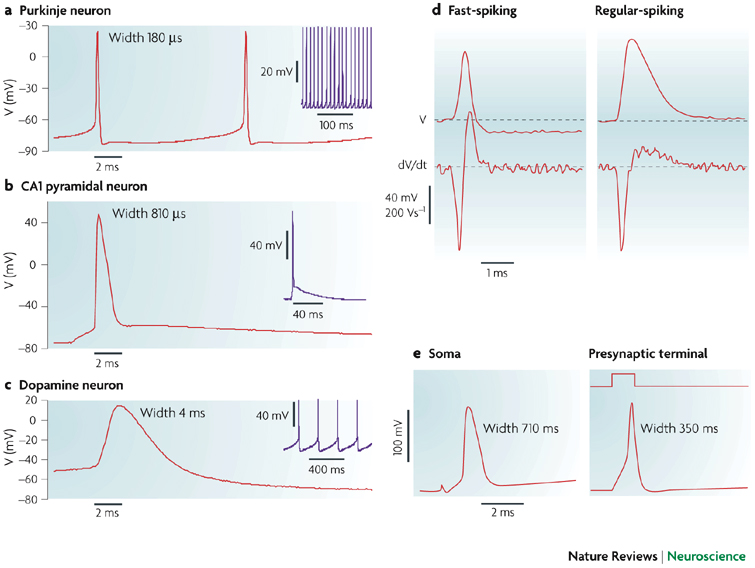 The reasons for these differences are various, as you will see if you read the referenced article, which I highly recommend as everything I write from here is based upon it. The main factors influencing AP differences are firstly that the classical AP diagram is based on an isolate squid giant axon (not neuron) in a superficial environment.

When we investigate neurons in mammals we investigate them relative to surrounding neurons, which influences chemoelectric potentials and subsequently APs. Furthermore neurons aren't uniform in shape which also has an influence. Secondly voltage gating varies within and between ions gates in the neural membranes for instance "the kinetics of sodium currents differ in detail between different types of neurons62 and, remarkably, even between different regions of the same neuron, with sodium channels in hippocampal mossy fibre boutons (formed by the axons of granule cells of the dentate gyrus) inactivating twice as fast as the sodium channels in the granule cell sonata" Bean (2007). Potassium channels appear to lack uniformity as well. See below for difference in voltages across ion channels between neurons. 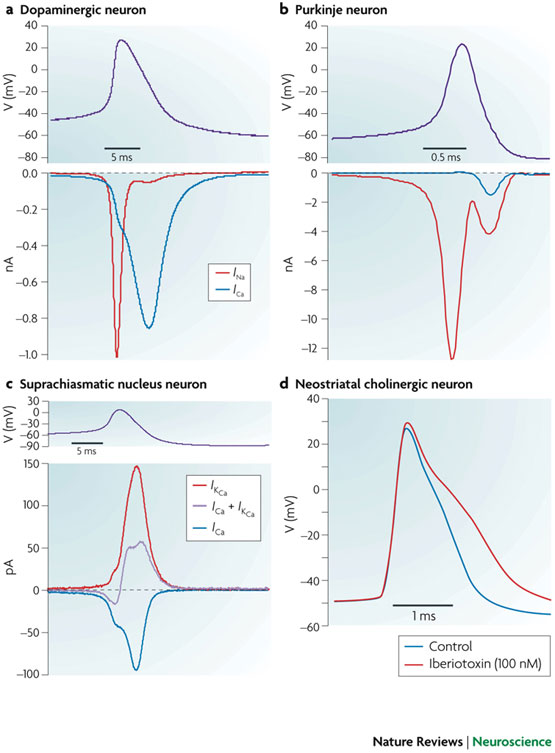 And there are other factors as well of course, such as frequency of activation influencing voltage required to depolarise. Depolarisation rates, and differences between fast spiking neurons, such as purkinji, and others.

Overall the brain is not uniform, despite what you may learn or have learnt in text books in classes. This is done to ease learning, can you imagine trying to learnt this without the basics? However this fundamental research has important implications for neural imaging, psychopharmatuics, and of course cognitive processes such as speed of processing etc.

In case you can't access the reference... The referenced journal article is a brilliant review in nature about this exact topic, its called "The action potential in mammalian central neurons" By Bruce P Bean

Not the answer you're looking for? Browse other questions tagged neural-network or ask your own question.

30
How are newly created neurons recruited into existing networks?
2
How many action potentials from presynaptic neurons would be required to make a postsynaptic neuron fire?
13
How is the biological accuracy of ANNs typically measured?
7
How does the brain break down visual information for processing? What "channels" is visual input broken into?
10
Does an action potential abolish an excitatory postsynaptic potential?
4
Hebbian Learning - Understanding Simultaneous Firing
5
A question on synapses
4
What is the relationship between visual attention network and visual stream (Two-streams hypothesis)?
4
"Nested Neurons": Are they biologically plausible?