The human visual system is very good at 'cancelling out' shadows and other lightning effects, and focusing on the contrast in images. A famous example of this is Adelson's checker shadow illusion: 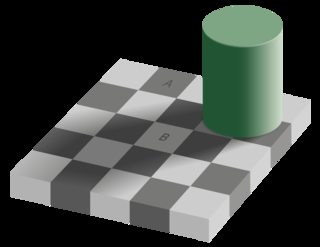 In the above image, cell A and B are the same exact colour, yet we see cell B as significantly lighter than cell B.

In this case, if I wanted to get a machine to make an observation similar to the human perception, I would use a technique like adaptive histogram equalization to enhance the contrasts and eliminate the shadows and lighting effects.

In computational terms, histogram equalization works by taking the cumulative distribution of the histogram of pixel intensities and stretching it to be a line. This transformation makes the histogram uniform, and thus maximizes the entropy and amount of information conveyed by each bit -- giving an information theoretic justification for why one would want detectors that use this sort of transform. Adaptive histogram equalization works the same way but instead of transforming the global histogram, first divides the image into a large number of tiles and then normalizes each tile. This tends to amplify the signal, while 'cancelling out' the local background due to effects like shadows or lighting gradients.

Laughlin (1981) showed that the large monopolar cells in the insect compound eye -- specifically in Calliphora stygia -- implement histogram equalization through their neural coding to cancel out the ambient contrast of typical natural scenes. Has something similar been shown in vertebrate visual systems? In particular, in the human -- or similar -- visual system?

Further, Laughlin (1981) could not look at adaptation of the eye to a specific scene, and was comparing to a static typical environment, has this research been extended to look at dynamic changes in the coding pattern in response to specific scenes?

This isn't exactly what you are referring to, but I think provides a similar function and has been shown in vertebrate vision:

Divisive normalization as a canonical computation across the brain

While this does not implement histogram equalization, I think it is actually a better-suited explanation of the checker board illusion - because local luminance and contrast normalises the activity of all neurons in the area.

Again, this doesn't quite answer your question but maybe provides an alternative computational step occurring in vertebrates?