Is there any evidence for a bias towards perceiving darker surfaces as 'figure' rather than 'ground'?

Given that surfaces which capture attention are more likely to be perceived as figures (or figures attract attention more than ground does?), is there a bias associated with the luminance of a surface? For example, we often see dark figures (e.g., text) on white paper.

Do you know of any literature to suggest a bias where darker surfaces are shown to attract attention more effectively than lighter surfaces (or vice versa)?

Or, alternatively, is there data available on a possible bias where figure-ground segmentation is more likely to occur for a dark figure on a white ground (or vice versa)?

Short answer
From my personal experience, I do not think darker surfaces are regarded preferably as the object, and light surfaces as the background.

Background
I have been pondering on this question for so long that I decided to post an answer. Perhaps it will draw attention from others who can give a more definitive answer.

This answer was inspired by this question on the Rubin Vase Illusion. It is an ambiguous figure/ground illusion which is thought to depend on the visual system analyzing scenes in terms of object (figure) and background (ground). You can see a vase when you regard the faces as background and vice versa. In the Fig. 1 below I have posted two versions of this illusion where the black and white portions are reversed. Personally, and hence anecdotally, I do not perceive a clear difference in the perception of the vase versus faces between both figures. Hence, based on this anecdotal evidence I tend to believe that the definition of figure and ground is independent on color (shades of gray in this case). I couldn't find references for the flip-flop rates or vase-versus-face perception time on the two stimuli, unfortunately. In all, what a great question! 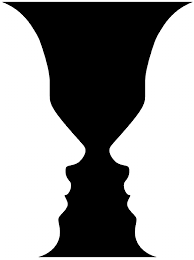 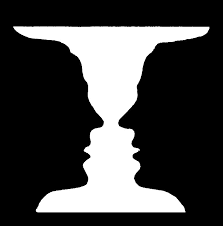 2
Is the Rubin Vase illusion an example of inattentional blindness?

9
Is there evidence for a unique isolated internal representation of loved ones?
8
Are there any rules about masking?
3
Are there any cognitive models for image interpretation?
7
Is there any credible evidence for the theory of Spiral Dynamics?
6
In psychophysics, why are log luminance rather than absolute luminance values reported?
4
Is there terminology for perceptual illusions at the moment that figure-ground reversal occurs?
4
If the optic nerve transmits to both hemispheres, how do split-brain experiments work?
2
Is there any evidence for or against the existence of neurons that encode surface slant in vision?
3
Is there a foveal explanation for the duck-rabbit illusion?
5
Is there evidence to support the Dunning-Kruger effect?