In "Theoretical Neuroscience" by Dayan and Abbott, section 2.2 "Estimating Firing Rates", it describes how by using a linear model in combination with averaged experimental firing rates you can acquire a non-linear model graphically. This is shown in the figure below: 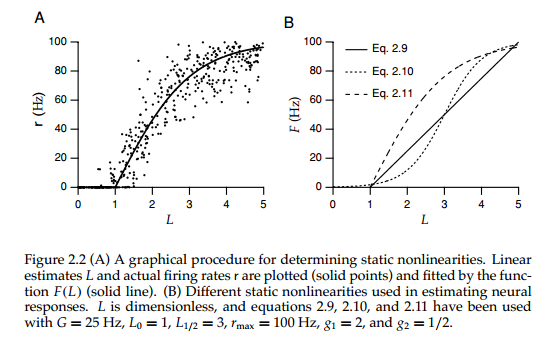 Given the synthetic neuron defined here, I was able to acquire both average experimental firing rates, as well as a linear model. I calculated the linear model by first acquiring the Spike-Triggered-Average using a white noise signal and then convolving it with the same white noise signal. Given that you can acquire the kernel according to:

And that you can the acquire a linear model given:

where $s(t-\tau)$ is the original white-noise stimulus.

However, when I try to plot this result, I get a graph that looks like: 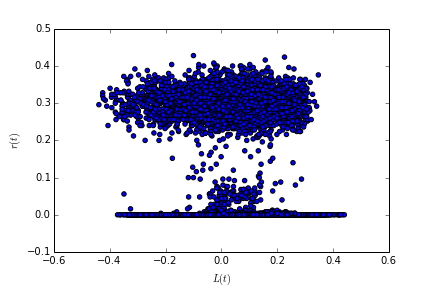 Given this graph, my reasoning and my code, where could I be going wrong?

Browse other questions tagged methodology theoretical-neuroscience or ask your own question.

9
How can I test whether Dorsal Raphe Nucleus (DRN) activity at night is related to variations in mood?
8
Analysis of parameter estimates from Ratcliff diffusion model
8
Best practice to handle double negatives when using the expectancy-value model?
2
How to compute weights and bias for a McCulloch-Pitts neuron?
5
How long does the trace of a memory last in the brain?
3
The article “Vector reconstruction from Firing Rates” of Abbott and Salinas
5
Can neuron change from excitatory to inhibitory (and vice versa) over time?
3
Using a Linear Non-linear Cascade with a Non-Random (deterministic) Stimulus
3
Biological Plausibility of FORCE training
3
What extent is non linear dynamics and chaos helpful to study brain function?