A question on synapses

we are looking into running simulations of the nervous system of C. Elegans. It is believed by most people that the worm's nervous system encodes information through graded potentials and/or plateau potentials rather than action potentials, as would be the case for example in many parts of the human nervous system.

We are planning on building upon a NEURON simulation created by the OpenWorm team. We want to see where we can get by including channel mechanisms and most importantly by making the transition from a spiking network model to a model reflecting the above belief that C. Elegans does not use action potentials. We then want to compare this with data collected at the University of Vienna.

Now, I am a student of mathematics and this is a project for university, so I am hopelessly confused by the neuroscience books I have been looking at. Instead, I hope that you guys can help me out with my question. To explain, consider the following scenario inside of C. Elegans:

Say I have neurons A and B, connected through some type of synapse. Neuron A is stimulated by a voltage clamp and generates a varying, graded potential lasting over a prolonged period (say 20 ms). Now what would a typical membrane potential of neuron B that one would expect in this situation look like? In pictures: 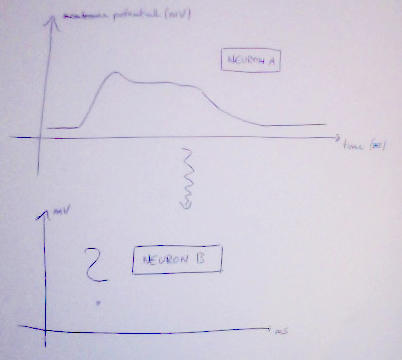 I realize this is a somewhat ill-posed question, but I am not asking for a detailed chemical or biological explanation of the process, but rather a heuristic that can serve as a starting point for a simulation. In case there is something already known in this respect, I would be thankful if you could point me to the references.

The next question would then be how one could implement this in NEURON, which has only NetCon to create networks. I figured I could use an artificial simulated synapse by drawing a small long cylinder with several compartments between neurons and then using a gap junction type connection, but I really don't know if this even makes sense.

According to this research paper by Lockary and Goodman, the resting membrane potential of C.Elegans is two fold because its a stepped resting potential of -70mV and -35mV. After an initial activation a resting potential of -35mV is held following a higher depolarisation, so on your graph the initial depolarisation would be a little higher, and then drops to -35mV for roughly 60+ secs. When terminated, or receiving a inhibitory signal this drops to -70mV. I don't see any reason why the receiving neuron would respond any differently so long as the activation strength was enough to create positive depolarisation. As mentioned by Izhaki in the comments, the strength of the synapse connections plays an important role. Here is a good thesis on transfer between neutrons in C.Elgans, it also explains the methods to investigates neutrons in the central nervous system of C.Elegans, and seems to see two patterns of activation depending on the method applied. Only a few of the neutrons have been fully recorded in C. Elegans so its possible that different potential patterns may occur, nervous systems are far from homogeneous, humans appear to use more than one type.

I can't respond anymore than this at the moment as I don't have time for the extra reading but I hope this is at least useful.

2
How many action potentials from presynaptic neurons would be required to make a postsynaptic neuron fire?
10
Does an action potential abolish an excitatory postsynaptic potential?
3
Modeling plateau potentials
1
Do STDP synapses potentiate AND depress at the same time?
12
Is a network of neurons the only factor in memory?
7
Question concerning Jeff Hawkins' On Intelligence
4
Integrated Information Theory - If correct could humans create artificial consciousness?
1
What comes first? Thought or electric activity?