What is it about Ken Reid's style of drawing lumps on surfaces [shown here] that makes our visual system so easily interpret it?

Ken Reid was an artist who drew for the Beano and other comics, and was known for strips such as Frankie Stein and Queen of the Seas. And for The Nervs, about the little men who run our brains, but that's not why I'm asking this. He had a rather grotesque way of drawing faces, which made protrusions such as chins and Adam's apples stand out using very few lines. There are examples of his work on Lew Stringer's blog and this copy of The Nervs strip. What interests me is why the lines he drew are so effective. What is the visual system interpreting them as?

To demonstrate, here are three images from the above-linked strip. I've marked the parts of interest with an arrow: 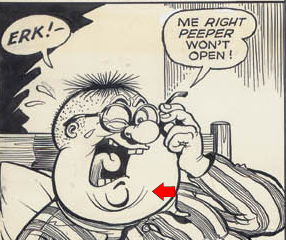 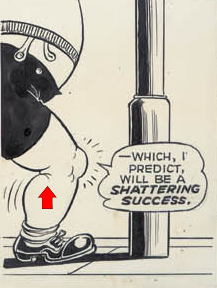 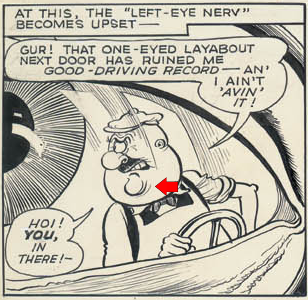 Similarly, in the third image, some of the three upward-curving lines could be folds where the chin presses back against itself. But is the visual system interpreting them all as folds? I don't know, but again, they readily give a sense of form. If there's anyone here who is working on perception of shape, I'd like to know how you think these lines are being interpreted.

By the way, I and other readers have noticed that Reid's drawings seem very "intense". As one reader commented in a blog, "they seem to enter the subconscious and stick there for the rest of your life". I'd be interested in any ideas on why, and how this relates to what I've asked above.

Browse other questions tagged vision or ask your own question.

4
What is the metabolic load of the visual system?