How do mammals estimate the speed of moving objects?

Has there been any research on how mammals predict the speed of moving objects? In particular, how do they integrate top-down information? For instance, do they have greater difficulty estimating the speed of a fast-moving sloth more than a moving mouse?

Two areas in the visual cortex are associated with the perception of velocity, namely:

Now this is all bottom-up processing. You basically ask as well whether top-down issues play a role. I do not think so. The visual system is basically split in a dorsal 'what' and a ventral 'where' stream (Fig. 1). The 'what' system identifies a target and the 'where' system (containing MT) determines location and velocity. As far as I know, there is no feedback from the dorsal stream onto the ventral one to affect velocity processing. 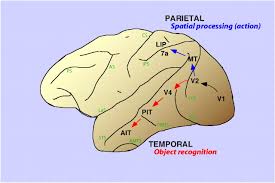 @AliceD gave a great answer on the bottom up pathway. Let me add some top-down processing bits into the picture, since that's what you are asking.

First of all, at a perceptual level, motion perception is biased by prior expectations and strength of motion signal. E.g., see:

The neural activity of MT (and behavior) is known to be modulated by attention. E.g., see:

Not the answer you're looking for? Browse other questions tagged cognitive-psychology neuroscience reference-request vision or ask your own question.

10
Do children show top-down processing as much as adults do?
3
How do graphic objects in data visualisation facilitate ease of interpretation?
7
How does the brain break down visual information for processing? What "channels" is visual input broken into?
3
Difference vs. Ratio of evidence in sequential sampling models
4
What is the relationship between visual attention network and visual stream (Two-streams hypothesis)?