Is emotional processing lateralised in the brain?

It was easy for me to find that language processing is lateralised and that creativity/logic processing possibly not (against pop-psychology claims). But which is the current view hold by experts on emotion about the lateralisation of emotion?

does not seem to talk about emotional lateralisation.

Alright, so I'll give this question a go... Admittedly, I'm not really familiar with theories of emotion lateralization, but let's look at some meta-analyses for insight!!!

As a quick theoretical note, a single study cannot confirm emotion-related lateralization. The representation of emotions or affect in the brain can change from context to context, person to person, and over time. This is why we need to rely on meta-analysis (in my opinion)!

This is a meta-analysis of positive and negative affect in the brain. Overall, the meta-analysis shows large correspondence between the brain regions that are involved in positive vs. negative affect (in favor of a valence-general "workspace"). Moreover, affect seems to be represented bilaterally in most regions as well as right temporal/occipital cortex (see image below).

These areas represent the "salience network," which is involved in self-relevant attention (e.g., to internal bodily sensations and "feelings"). 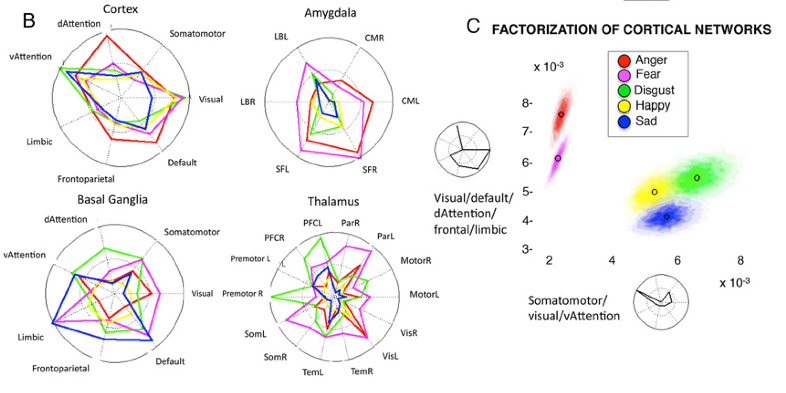 The above image (B) shows activation intensity in cortex, amygdala, basal ganglia, and thalamus for each emotion. You can see that some regions are more strongly active for certain emotions in a lateralized manner (R and L mean Right and Left Hemisphere).

The most significant lateralization was for happiness, which showed "left-hemisphere dominance in the hippocampus" (p. 16).

While these meta-analyses provide interesting clues about emotion lateralization, I'm going to go ahead and say that we don't really know whether emotion is lateralized. Moreover, the idea of "emotional processing" is incredibly vague and is likely constituted by more basic psychological processes (e.g., interoception and exteroception).

The theory about sympathetic/parasympathetic afferent streams to the right vs. left insula seems plausible (outlined in Wikipedia; Craig), especially given the importance of interoception to affect and emotions (Barrett & Simmons, 2015).

However, overall, it's just not clear.

From my knowledge emotion lateralisation is still a theory.

But there are studies that apply this theory for their works: https://www.researchgate.net/publication/262288467_Detecting_emotion_from_EEG_signals_using_the_emotive_epoc_device

And there are also studies that indicate that affective (emotion) processing is different for left-handers: EEG correlates of handedness

In my own opininon I would say that emotion lateralisation is present, but not generic. But i am not an expert yet, just a both handed individual that has studied the effects of dominant hand change and how this affects human emotion.

Not the answer you're looking for? Browse other questions tagged emotion lateralization or ask your own question.

6
How to measure emotional intensity?
3
What is the purpose of hemispheric specialisation in the brain?
4
Why do the hemispheres of the brain control the opposite sides of the body?
8
How is brain processing different for situation-less vs. situated emotional faces?
9
Does a split brain affect the inner voice?
6
Difference in hemispheres when processing of somatosensory information
4
Is it scientifically backed that sensory signals always go through limbic/emotional brain system?