Does the retina contribute in distinguishing lines and borders?

I think there is a phenomenon behind the way which our eyes judge between lines of contrast, like black lines on a white page, by just recognizing the contrast areas at the level of the rods and cones. I don't understand how this phenomenon works in the retina.

Background
In the retina, the neurons that guide the visual signal to the brain, the retinal ganglion cells (RGCs), process contrast. The receptive fields (RFs) of these cells exhibit a so-called center-surround organization (Fig. 1). They integrate the signal from multiple cones in the retina. ON RGCs fire when their RF is illuminated in the center (the central cone in the retina in the RF is illuminated) and they are inhibited when their surround is illuminated. OFF-center RGCs do the reverse. Together this organization results in sharpening of contrasts and aids in the coding of edges and contours. Midget cells also have RFs like this.

Remember that the retina is considered a part of the central nervous system by some. Thi because of its embryological origins, but also because of its complexity.

Note that further processing of contrast and edges occurs in the primary visual cortex (V1) (Schmolesky, 2002) and that awareness of that contrast information, i.e., the perception of edges, patterns and objects within the visual field occurs at high-tier associative cortices (Lorreys, 2005). 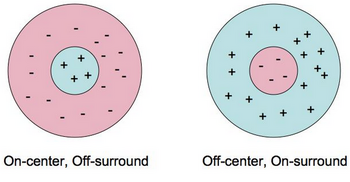 Not the answer you're looking for? Browse other questions tagged neuroscience vision neurophysiology sensation sensory-perception or ask your own question.

10
Are the center surround receptive fields learnt or inherited?

25
Why is white on black considered higher contrast than black on white?
12
To what extent do individuals vary in their ability to mentally visualise?
7
How come we see a line when there isn't one in this picture?
3
What is the location of the center-surround receptive fields of retinal ganglion cells?
13
Why is it easier to see black text on a white background?
4
Do we perceive contrast colour patterns easily because of adaptation?
2
What is the cause of differences that are too small to see?
6
Why our brain can't fool itself to constantly produce dopamine?
3
Is Paul's Churchland claim about qualia supported by science?