Is the brain inherently social?

The concept of the "social brain" is thrown around a lot, but it's not entirely clear to me what it means.

To me, it could mean a few different things:

I have superficial familiarity with the area of social cognition and the brain structures (TPJ, DMN, mirror neurons) and chemicals that support it (oxytocin). Based on these literatures, my assumption is that social cognition is supported by domain-general processes that have been co-opted for social use--but we don't have "social" modules or chemicals.

The "social brain" concept likely originated with Robin Dunbar's Social Brain Hypothesis, proposed in 1998. However, Dunbar was not suggesting that the brain has dedicated "social modules". Rather, the hypothesis was that the evolutionary driving force behind intelligence (increased brain size and capacity) was social - most prominently the need to track relationships in communities of up to 150 people (henceforth known as Dunbar's number). However, I'll focus my answer on the question as asked.

If the criteria for "inherently" social requires some "module" of the brain that has no value outside of a social context, then it is difficult to argue that the brain is "inherently" anything because the brain is so plastic (contrast this view with nativism).

It is difficult (though not impossible) to imagine evolutionary value for language and speech production outside a social context, and this function does appear to have domain-specific modularity in the brain. 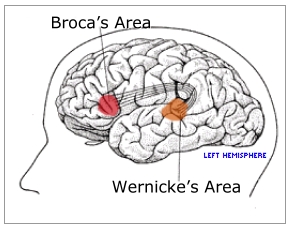 For example, Broca's area is considered the "motor speech cortex", and appears to be dedicated to speech production. But like most areas of the brain, the boundaries of this region are not well defined, and on closer inspection, neither is its function - although just about all functions attributed to Broca's area are social. While language processing has for a long time been associated with Broca's and Wernicke's areas on the left side of the brain, language processing can spread out as far as the right hemisphere, and some individuals with lesions in these regions can retain largely unaffected language capabilities.

The FFA, in the fusiform gyrus, is another potentially social part of the brain, critical for face recognition - a lesion in this region leads to prosopagnosia (face blindness). This function is distinct from the system for recognizing inanimate objects, such that other visual agnosias may not affect facial recognition ability. This function is already developed in infancy, and is a strong candidate for domain-specificity. However, once again, this region of the brain may have other functions, and facial recognition can be subsumed (although less efficiently) by other regions.

Both autism and Asperger's provide another hint at the social nature of the human brain. Though their etiology is not well understood, it is considered biological, suggesting a disruption of some inherent social mechanism of the brain. However, since ASD affects other cognitive functions as well, it is again not clear that a distinctly social element of the brain is involved.

Both social reward and social pain have been shown to largely recycle the non-social reward and punishment systems, suggesting that there may be nothing inherent in the brain to support learning by social motivation. However, as pointed out in the question, Theory-of-Mind capabilities may have some modular support in the brain, though no domain-specific mechanisms have been implicated.

Noam Chomsky famously argued that language acquisition in humans happens far too quickly to be accounted for by simple learning - that is, our brain must be somehow predisposed for language acquisition. How this happens is still not well understood, but the same logic is applicable to many other aspects of our social capabilities: We are simply too well honed at social functions such as language, relationships, modelling, and other social behaviours to be accounted for by learning / culture alone.

Not the answer you're looking for? Browse other questions tagged social-psychology cognitive-neuroscience social-cognition or ask your own question.

7
What are the effects of social rejection on the brain?
8
Neural Mechanisms of Accumulation and Triggering
6
How can one estimate the excitability or mood of general public on a specific day?
10
What are the neurological differences between varying types of love?
5
Would administering oxytocin in games of deception improve performance?
3
Is there any connection between visual processing ability and social skills?
4
Why do we require social interaction/engagement?
2
How are positions and counts of higher concepts encoded in sparse representations?